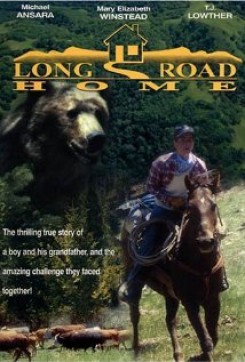 Long Road Home is a Grapes of Wrath story set in 1937, 1938 and 1939. Ernie and Bessie Robertson are Ma and Pa with five, mostly-grown kids, and Little Ben, the baby. Ernie, who has worked in the rodeo, now has a lame leg, so the family, who only has $1.32 is leaving Texas during the dust bowl. They travel down the highway in an old car going from place to place picking fruit. They talk of having security: again, a life in a house, being able to grow their own vegetables, send their kids to school, and celebrate birthdays. Titus, who employs the Robertsons, fears the union and uses unethical force to break it up as it becomes a powerful, organized force. He puts guards in the fields with clubs to keep the union organizers away. Ben dies of diphtheria and the eldest son, 16 year-old Jake, finds a pretty 13 year-old girl named Clara, and discovers the joys of sex with her. When the pickers and growers alike attend a parade in town, complete with American flags, the union disrupts the parade with signs and slogans. A fight breaks out in the crowd. The Robertsons try not to take either side. They just want to work, eat and get on with their lives, but little by little, Jake gets involved with the union. He convinces his dad, who has had enough humiliation and a couple of confrontations himself, to join the union. The family in one decisive moment moves onto some land purchased for the union by a Hollywood movie star. Tents and showers are provided and the pickers are shown singing and dancing around the campfire. Meanwhile Titus, gets a doctor from the Health Department to inspect the camp with him and his bullies for health violations. The doctor finds nothing wrong, but Titus and his bullies start a fire to burn the camp down. The pickers immediately discover the outbreak of fire, and a fight breaks out. Titus comes at Ernie with a sickle and the intent to kill him, but Jake saves his Dad's life, picking up a gun on the ground and killing Titus. Fortunately Jake is not arrested as even the doctor was a witness to the situation surrounding the shooting. In the end, the family is able to buy a shack. They fix the roof and Ma makes curtains. They are seen saying a prayer at the dinner table and are again hopeful and resolute about their climb back up.

Early in the picture, there is a campfire with a dog seen in the distance at the campfire wagging his tail. The other animals used are horses seen primarily in the parade scene. Horses are also seen in the background as the fight breaks out between growers and pickers. There are no gunshots and the horses do not appear to be disturbed in any way. Although screened in 1996 for video release, the movie was made in 1990 and aired on NBC in February 1991.