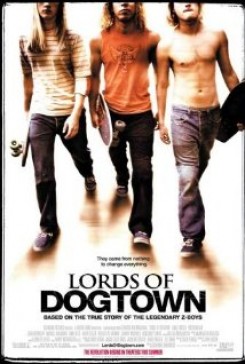 The film follows the surf and skateboarding trends that originated in Venice, California during the 1970's.

"American Humane’s role American Humane’s Film & Television Unit did not monitor all the animal action in this film. Lords of Dogtown is a Screen Actors Guild (SAG) production, and therefore it was required to provide American Humane’s Certified Animal Safety Representatives on-set access whenever animals were used. However, due to limited resources and/or scheduling conflicts, the Film & Television Unit was unable to directly supervise every scene in which animals appeared. Columbia Pictures did provide the Film & TV Unit with a pre-release screening of Lords of Dogtown, and because the production complied with all requirements established by American Humane, the film has received a “Not Monitored: Met Production Expectations” rating.
Featured animal scenes In two separate scenes, the gang hangs out next to the pool in Sid’s expansive backyard. Sid’s three dogs – one pit bull, one golden retriever mix, and one “Heinz 57” – loll around with them or run and bark playfully. While the guys christen the “dog bowl” with an extended sequence of skateboarding tricks, the animals perform mild, non-descript action in the background.
The three dogs were filmed in various positions, either alone or with one of the actors nearby. Sometimes the trainers would call them out from sit or down-stay positions if the director wanted to add movement to the scene. To encourage the dogs’ play in the yard, trainers hid behind trees and tossed a ball to the golden retriever while cuing the “Heinz 57” to do multiple crosses that looked like rambunctious play. Trainers stepped in and offered rewards on cut.
American Humane’s Certified Animal Safety Representative on the set made sure the dogs were moved away from the pool edge when tricky skating stunts caused wipeouts that sent the boards flying over the edge.
During filming of a professional competition, Tyson the skateboarding bulldog was visiting the set with his caregiver, and the filmmakers asked him to give an impromptu performance. This action was not staged and therefore American Humane’s Certified Animal Safety Representatives were not present at the time of filming. However, this daredevil dog is quite famous and even has his own website: www.skateboardingdog.com.
American Humane monitored one scene with a rabbit that did not make it into the theatrical release of the film. The production complied with all Guidelines for this animal action.
American Humane’s Film & TV Unit did not monitor scenes with the caged chickens, the Alva family’s Pekinese, the two menacing rottweilers, or the seagulls on the pier. "