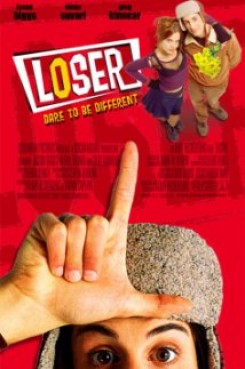 In this comedy Paul, a nerdy, Midwesterner moves to New York City to attend college. He develops a crush on Delores, who many refer to as a loser, just like Paul. The two would be a perfect match, except that Delores lusts after her professor. Paul decides to try and change Delores' mind about who she really likes.

Paul volunteers at an animal shelter. The scenes of the animal shelter were filmed at a real shelter in Toronto, Canada. The staff of the shelter which included two veterinarians as well as a representative from the Toronto Humane Society and an Animal Trainer were present everyday of the filming. The animals that were shown inside the cages in the background of these scenes were actual animals that were in the shelter at the time of filming. Any animal that was taken out from a cage and handled was provided by the trainer. The trainer stood just off camera as the scene was filmed. A fake syringe was used when the vet is shown giving a dog some oral medicine. All of the medicine was colored water or a treat made to look like a pill. Birthing Sequence Paul and Delores go to the shelter after it closes one night and find a cat has just delivered a litter of kittens. As they enter the front door, they find a sack with a newborn kitten lying on the ground. Using gloves, they pick the sack up and put it on the examining table and begin to open it and release the newborn kitten. They bring the kitten to the mother cat who is lying in a corner of the room as the rest of her newborns nurse. They put the kitten in with its' siblings. The mother cat belonged to the trainer and the kittens were born six weeks before this scene was shot. The trainer made up a bed in the cor ner of the room with some blankets and placed the mother with her kittens on the bed. Since the kittens always seemed to like to nurse, the filmed scene showed natural behavior. The sack and the newborn kitten inside were not real. They were made especially for this part of the film by special effects. When the young couple take the kitten from inside the sack and bring it to it's mother, the trainer used some non-toxic makeup to make one of the six week old kittens look like it had just been released from its' sack. An American Humane Association Observation If these animals appear appealing, please make a visit to your local Animal Shelter and adopt a wonderful companion. Shelter rescues make great pets! For more information on adoption you can go to American Humane Associations "Adopt A Cat Month" page at: www.americanhumane.org/cat/default.htm