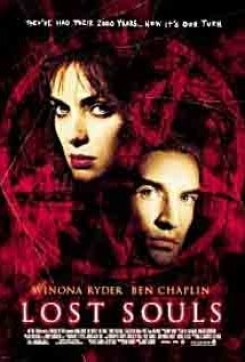 In this suspense-thriller, Winona Ryder plays Maya, a young woman formerly possessed by Satan. She believes that Satan is about to take over the body of a man named Peter Kelson, who, incidentally, has just finished writing a book about a killer. With the help of a priest, Maya relives her trauma in order to help Peter avoid demonic possession.

"In a brief scene, two dogs bark and growl at each other, unsuccessfully trying to attack. Two trainers held the dogs’ leashes off-screen and verbally cued the dogs to bark and growl.
At another point in the film, a fawn walks into the middle of a road. We hear a car coming and see the frightened fawn illuminated in the oncoming headlights. The fawn then walks off the road and the car passes.
For this scene, two trainers were on set. One trainer released the fawn on the empty road while the other stood off into the woods. A car was parked down the road a bit and the headlights were turned on and shined at the fawn. The trainer waiting in the woods cued the fawn to come, and when the fawn was off the road with the trainer, the car slowly drove by. "