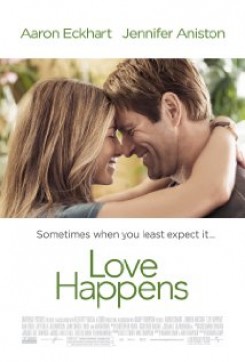 A widower whose book about coping with loss turns him into a best-selling self-help guru, falls for the hotel florist where his seminar is given, only to learn that he hasn't yet truly confronted his wife's passing.

"Dog During various flashbacks in which Burke talks about the car accident that killed his wife, a dog stands in the middle of the road and a car swerves to avoid hitting it. It is raining and the dog looks at the car as it approaches. An empty candy wrapper was filled with a dog treat and placed on the street before filming. The traffic was closed off and grounds were checked for hazards ahead of time. Rain towers produced the rain, which did not disturb the dog. A well-rehearsed stunt driver carefully drove the car a safe distance (20 feet) away from the dog. A trainer stood nearby, cuing the dog to stay and eat the treat. Another trainer stood behind the cameraman and called to the dog to get it to look up.
Cockatoo Rocky the cockatoo hangs out in Burke’s in-laws’ kitchen. Burke sneaks into the house and steals the bird, running with the cage out of the kitchen and into his van. The trainer placed the bird in the cage. The actor carried the cage to the van and set it inside, where another trainer was hiding.
Burke then drives to a wooded area, parks the van, takes the cage (with the bird inside) out of the van and walks through the woods to a spot where he sets the cage down and opens the door to let Rocky be free. The bird hops out of the cage and walks around as Burke tries to shoo it, but the bird refuses to fly away, so Burke leaves it there. Moments later, he approaches the bird again, and this time the bird takes flight. This sequence was filmed in separate shots. The actor was instructed on handling the bird before filming began and the grounds and cage were checked for hazards. The actor carried the cage with the bird inside and set it down on the ground. Trainers surrounded the area and stood off-camera, calling to the bird to get it to hop around. A lightweight monofilament line was tied to the bird’s leg and a nearby trainer held the other end while it hopped around and trainers called to it. The bird taking flight was computer-generated imagery. As a man (Martin Sheen) bends over to pick up the newspaper from his front lawn, Rocky flies over him and onto the lamppost next to him. When the man straightens up, Rocky hops onto his shoulder and they walk into the house. A trainer released the bird to fly to another trainer who stood waiting. The second trainer then cued the bird to jump onto the actor’s shoulder. The actor was introduced to the bird and instructed on its handling before filming. A trainer was waiting inside the house to retrieve the bird when they entered. The bird and actor were well-rehearsed for this scene."