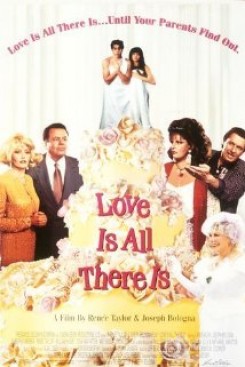 Love Is All There Is

Love Is All There Is, is a romantic comedy about two families who are rivals in the catering business and whose teenage children fall in love with each other. Rosario is Sadie and Mike Cappamezza's only child and he is a devoted son until he meets Gina Malacici, the girl of his dreams. Gina is also an only child and her parents, who are upper class and believe they are better than everyone else, want only the best for her. So when the two meet and fall in love, their families aren't too happy about it and they try everything they can to break the kids up. But soon the parents are forced to realize that their children are old enough to make decisions on their own and the parents have to let go of their babies.

Sadie is worried about losing Rosario to Gina so she goes to see Mona, her clairvoyant. Mona gives her two white doves in a cage and tells her she must sprinkle oregano on one of the birds to protect Rosario from ruining his life. She sprinkles the oregano on the bird and hands Sadie the cage. Sadie leaves and walks down the sidewalk holding the cage with the doves in it. When Sadie returns home she tries to be seductive with her husband, but he lays on the bed petting Fidella, his cat. Fidella just lays next to Mike and enjoys being petted. Sadie is upset about her love relationship, so she sees Mona again and Mona gives her erotic candles. The next time Sadie tries to be romantic with Mike, he is again laying on the bed petting Fidella, but this time he gently pushes Fidella off the bed to make room for Sadie. Fidella walks over and lays down on the window sill. For this scene, the cat had a harness on him and the trainer was in the background holding the tether off camera. Fidella is seen again later when Sadie is fitting a bride for her bridal gown. The bride is a large girl, but her mother, Adele, is larger. Adele is watching her daughter and she goes to sit down. When she does, she almost sits on Fidella, who was merely resting in the chair. Fidella sees the woman and jumps off the chair just in time. To accomplish this scene, the cat was on a tether with the trainer just off camera. At the precise time the woman starts to sit down, the trainer pulled the tether and the cat jumped down from the chair. As Rosario and Gina are pulled apart from their families, Sadie notices the female dove is injured and lying in the bottom of the cage. For this scene, a fake bird was placed in the bottom of the cage. After the parents realize they have to let their children grow up, the kids decide to get married. At the wedding the two doves are in a cage and are carried in the wedding procession. After Rosario and Gina say their vows, they each grab one dove and release the birds in the wedding chapel. For this scene, the actors simply let the birds go and after the scene was filmed the birds were retrieved.