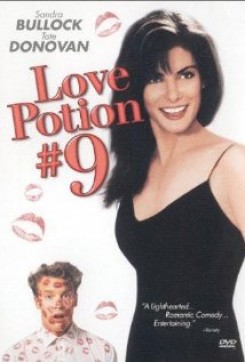 Paul, a very introverted, nerdy type, biochemist is convinced by his friends to go and visit a palm reader. After having his palm read, Paul is informed by the Gypsy woman that his future looks very dismal in the female companionship department and suggests he take her special potion...Love Potion #9. She says that this potion will make Paul irresistible to all women with whom he speaks. Paul resists, but the Gypsy insists that he take some of the potion with him. Paul, being a very matter-of-fact type of a guy, has trouble believing the Gypsy and her story of this potion, but he tucks the little packet of potion into his pocket and leaves. He soon forgets about the Gypsy and the potion. When he arrives at his home that evening he finds the packet, still in his pocket, and tosses it into the garbage, dismissing the whole improbable thing and retires for the evening. While Paul is slumbering, his pet cat is on the prowl. The cat dumps over the trash and, finding the small package, laps up a bit of the potion. Within a matter of minutes Paul is awakened by the sounds of lots of little cat voices. Paul gets up to investigate and discovers that his whole house is filled with male cats, who found their way in through an open window, and that his female cat is peeking out from a china hutch drawer, hiding from them. The next day Paul decides to take the rest of this potion to his friend/colleague, Diana. Diana is also a nerdy type biochemist, who Paul just happens to have a crush on. Together, the two of them devise a plan to test this chemical out in real life situations. They agree to divide the potion, half for Paul and half for Diana, and meet back at the lab in two weeks with their findings. This couple take us through some ridiculous and chaotic escapades as this "plain-Jane" and "plain James" become absolutely irresistible.

In the scene where the cats all come in search of Paul's, now tantalizing, cat, 40 cats were used, all of which were neutered males. This scene was shot in several cuts. The cats were released outside of the apartment window by one trainer and called from inside the apartment by another trainer, who was out of camera range. Once inside the apartment, the cats followed hand and verbal commands to sit, stay and move on cue, with food rewards. The cat seen eating the "potion", was actually eating a small amount of cat food placed on the paper. The cat's voices were added in post production. Paul's cat is also in other scenes eating her dinner, meandering around the apartment, sleeping with Paul and playing with her squeaky toy. Diana has two chimpanzees in her lab, one boy and one girl. Before Paul and Diana try the potion out on themselves, they decide to try some on the chimps. They take the boy chimp into another room. Diana takes a swab and puts some of the potion on the girl chimps' lips. As soon as the female makes a little sound, one of the walls starts to come down. We see that it is the male chimp breaking through. The female, seeing him come, runs and gets into her cage, closing the door behind her. The male chimp jumps on the cage and furiously humps the cage until he finally collapses, falling fast asleep. This scene was shot in cuts. The liquid that was placed on the chimp's mouth was a sugar water mixture, which the chimp liked. The chimp seen knocking down the wall was trained to do so with hand and verbal commands and food rewards given by his trainer. The wall was constructed of a very thin balso wood, which was easily knocked down and caused no injury to the chimp. The chimp had been trained to make the "humping" motion and responded to hand and verbal commands, with food as a reward. The little girl chimp was not actually in the cage during this scene. When the chimp collapses, he was simply given the verbal command to "lay down and go to sleep".