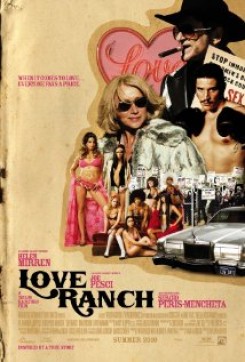 A drama centered around a married couple who opened the first legal brothel in Nevada.

"Toward the end of the film, two men on horseback lasso tourists in the street while Grace’s (Helen Mirren) car waits in the traffic backup the men are causing. The traffic was controlled and kept a safe distance from the men on horseback, who were costumed trainers and experienced horseback riders. The horses were unfazed by the well-rehearsed lassoing action -- they merely walked a few feet for this brief and mild scene. Due to late notification or limited resources, American Humane did not monitor some of the horse action or any of the dog action. Love Ranch does not carry the American Humane disclaimer at the end of the film because the production did not give American Humane a pre-release screening of the film, which is one of the requirements for issuing the disclaimer. "