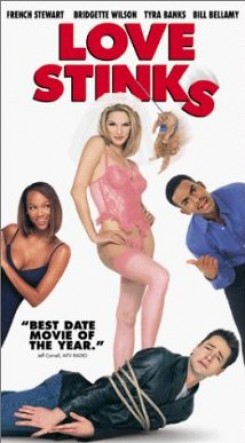 Love Stinks is the story of Seth, a successful television producer who thinks he has fallen in love with Chelsea, the woman of his dreams. Chelsea also believes she has found Mr. Right and will stop at nothing to make sure they tie the knot.

When is slapstick no laughing matter? AHA has received many calls from the public concerning what is perceived as "Stinky" animal treatment in the film. The scene where Seth attempts to hurt his ex-lover by tossing her cat off a pier has rompted concern from many audience members. The question of comedy vs. cruelty has become an ongoing discussion among some members of the humane community. AHA's Campaign Against Violence works to educate the public about the very real link between animal abuse and human violence in the real world. However, in film AHA's mission is the protection of animal actors. No animal was harmed in the making of Love Stinks and many safety precautions were in place during the filming of the above scene. While the debate rages in the media, in board rooms, living rooms and government forums concerning content in films, AHA respects the First Amendment rights of filmmakers and creative artists. This same amendment also protects the rights of the public to protest the depiction of images that they find objectionable. AHA is focused on the important work of protecting the live animals that will continue to inhabit and enrich the world of filmed entertainment.