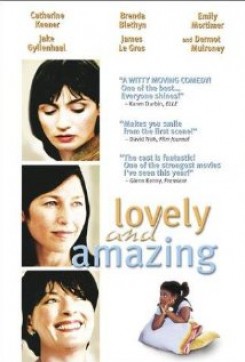 Set in Los Angeles, Lovely & Amazing examines the complicated lives of a mother and her three children. Brenda Blethyn is Jane, the mother of two grown daughters, Michelle (Catherine Keener) and Elizabeth (Emily Mortimer), and an adopted young girl. While her adult daughters struggle with their careers and love lives, Jane contends with her own set of worries, including raising an adolescent and coming to terms with growing older.

Elizabeth rescues stray dogs, which are featured throughout the film. One dog sits at the kitchen table as Elizabeth sets the table and converses with another character. A trainer set the dog on its mark and stood off-camera to supervise. Later, Elizabeth pets a dog lying on the floor next to her. She rolls the dog over and there appears to be some stitches on its belly. A trainer adhered knotted thread to the dog with a washable adhesive glue to simulate the stitches. The same dog later stands in a doorway wearing a cone around its neck. The on-set veterinarian helped the trainer place the cone in a comfortable position around the dog's neck.

In another scene, Elizabeth opens a can of dog food and puts it into a bowl on the floor. She calls to a dog, which runs to the bowl and begins to eat. A trainer put the dog on its mark and used hand signals to get the dog to achieve the action. Later, this same dog lies on the bed next to Elizabeth. The trainer placed the dog on its mark next to the actress. During a walk in the park, Elizabeth encounters another stray. She stops and looks at the dog and then searches for its guardian. In the next scene, Elizabeth stands at her mom's door holding the stray dog from the park in her arms. The trainer placed the dog on its mark and scattered some food on the ground so it stood and ate as the scene was being filmed. For the following scene, the trainer handed the dog to the actress, who then held the dog in her arms.

Elizabeth's last rescue happens as she and her young sister wait for their car. A dog sniffs around a grassy area and as Elizabeth bends down to touch it, her sister suddenly screams. A trainer placed the dog on its mark and scattered some food on the ground so that the dog would remain in the area. The next scene shows Elizabeth getting her lip stitched at the hospital, indicating that the dog bit her lip. In reality, baby food was applied to the actress's face so that when the actress approached the dog, it merely looked up and licked off the food.