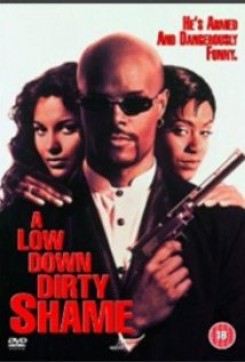 Low Down Dirty Shame involves lies, love, deceit and murder. Shame, short for Shamus, is an ex-cop who was wrongfully accused of stealing $20,000,000 of drug money from the scene of an arrest. As there was no proof of Shame having the money, he was not arrested, but simply discharged from the police department. Shame picks up the pieces of his life and becomes a private eye after his dismissal from the police department. He and his assistant, Peaches, have been assigned to the very same case which was the cause of Shame's dismissal. They must try to find the notorious drug king, Mendoza. They must also track down Angela, Mendoza's ex-girlfriend, who was also Shame's old flame. Shame is soon to find out that it was Angela who stole the money and jeopardized his life and career, and that his true love had been right before his eyes the whole time...Peaches.

Animal action is limited to one scene. While Shame is in pursuit of Mendoza, one of Mendoza's men releases three Rottweilers from his van. The dogs chase Shame down a hallway of an old warehouse and confront him. Remembering a story that Peaches had read to him from a tabloid magazine about dogs not attacking if you sing James Brown songs to them, he does just that, causing the dogs to sit down in front of him and listen. When Mendoza's man sees this, he tells the dogs to attack, but to no avail. Shame sees a button which reads "garbage" and pushes it. This releases garbage and meat scraps from overhead onto Mendoza's man. The dogs turn to Mendoza's man, smelling the meat scraps, and start to bark at him. One of the dogs jumps up and grabs his arm in his mouth. To accomplish this the dog's trainer, doubling for the actor, ran down the hall. He used a clicker to make the dogs follow him. For the barking scene, the dogs followed verbal commands from their trainer to "speak". When the dog is seen grabbing onto the man's arm, a stunt man with a padded arm was standing in for the actor. The dog had been trained to grab onto the man's arm upon cue, with food as a reward.