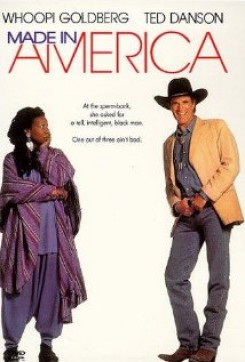 An African-American teenager discovers that her father was not the man who raised her and that she was conceived via a sperm bank. Zora plays detective and goes in search of her biological father who turns out to be Hal Jackson, a flamboyant, white car dealer. Both Zora and her widowed mom, Sarah, have a problem adjusting to the idea that she was fathered by a white man. Sarah takes great pride in her black heritage and runs a shop called The African Queen, in which all sale items are focused on African-American culture. Nobody has more difficulty adjusting to the news about his paternity than Hal, who until now, has led a purely hedonistic existence. He's never had a child and before he realizes it, he starts behaving like a father and a romance develops between Hal and Sarah.

Hal makes his own television commercials in which a variety of animals are featured. His co-star in one is a large brown bear which is first seen standing in a portable cage on the car lot. Hal is given explicit instructions not to make any sudden moves when working with the bear, but when Zora breaks the news of Hal's paternity to him, Hal reacts and the bear is all over him. Eventually the bear ends the scene by kissing Hal. This scene was shot in cuts using both the star and the trainer photo-doubling for the star. The trainer wore a Ted Danson mask and wrestled and played with the bear, who is very tame. In another commercial Hal is on the back of an elephant as it stands up and rears. The elephant happily accepts peanuts from Hal until Hal is distracted by Sarah and the elephant's trunk mistakenly vacuums up a lit cigarette instead. In reaction the elephant roars and takes off, following Sarah on her bike. With the elephant in pursuit, Sarah rings the bell to warn people and traffic to stand clear, but the elephant is following the sound of the bell and eventually runs into a lake, with Hal on his back the whole time. Again, this scene was shot in cuts with both the actor and the trainer in a mask photo-doubling for the actor. Candy was substituted for the lit cigarette when the elephant was to eat the cigarette. Camera angles made it appear that people were closer to the elephant than they actually were. Traffic was carefully staged and controlled and stunt drivers drove the vehicles. A special pool was constructed on the edge of the lake with a gunite bottom. It had a gentle slope and went from 0 to about 8 1/2 feet deep. The elephant is 8 1/2 feet tall and loves the water. The trainer was on the elephant when the elephant went into the water. The elephant had been trained to blow out water on cue. A chimp appears briefly in another of Hal's commercials. Sarah has a pet cat which was filmed in several scenes. A parrot in a cage is seen briefly and pigeons on a city street are primarily atmosphere.