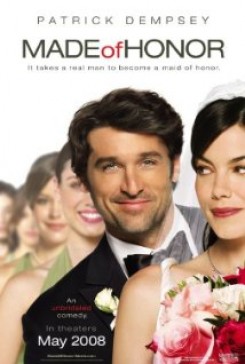 A guy in love with an engaged woman tries to win her over after she asks him to be her maid of honor.

Horse Tom mounts a horse and rides on a long trail through a forest. The horse gallops full speed through a graveyard until it stops abruptly a mere couple of feet in front of an iron gate, causing the rider to fly forward off the horse. For this scene, a stunt rider rode the well-trained horse through the woods on a custom-made pathway. The horse only cantered through the woods for about 200 feet -- camera angles and editing made the distance look longer. The camera was attached to a special motorized bike, which was driven by a stunt driver a safe distance in front of or behind the horse, depending on the take. The horse, which is normally part of a jousting team, was accustomed to having objects near its head, although the trail was cleared so that no branches would hit its face. Soft latex prop branches were used for close-ups of the actor being hit in the face with branches. Two smoke machines were placed deep in the woods to give the effect of fog. The graveyard was dressed with breakaway plaster and foam set pieces. Near the iron gate, after the camera cut away, wranglers repositioned the horse to stand on a rubber mat with thick traction. The horse was cued to pull back, almost rearing, making it appear as if it came to a quick stop. A wire contraption was used to flip the stunt rider over the horse and onto the ground. Several wranglers and stunt riders were nearby on foot and horseback throughout this scene. Due to scheduling conflicts or limited resources, American Humane did not monitor any of the dog, cattle or sheep action.