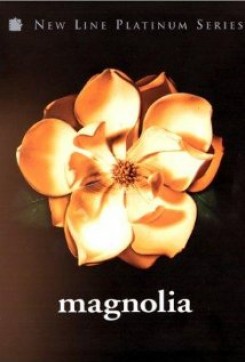 The drama takes place in the San Fernando Valley in one random 24-hour day. The film is a study in relationships and an intricate multiplicity of plots that add up to one story. We meet a dying father, a young wife, a male nurse, a famous prodigal son, a police officer in love, a boy genius, an ex-boy genius, a game show host and his estranged daughter. Magnolia is a mosaic of American life viewed through the windows of comic and poignant vignettes.

A dying man is propped up on a bed in his den where his five dogs lazily keep him company. The dogs, a variety of breeds and sizes, peacefully lounge around on cushions, rugs, and sofas. In a few scenes, the dogs dutifully clamor to the front door at the sound of the doorbell. Trainers conditioned the dogs to run from A to B on the sound cue. One scene shows the male nurse clumsily trying to gather up some spilled medication from the kitchen floor. One of the dogs runs in and gobbles up several pills before the caretaker can stop him. Later in the film the same dog appears dead from the presumed overdose. Paramedics are seen wrapping the animal in a blanket to carry it out of the house. For this scene the dog was actually eating little treats and mints. When the animal appears dead it was doing a trained lay down and focused on the handler who was just out of camera range. The most dramatic sequence involves the use of frogs. In the course of the filmmaking process real frogs were used in combination with fake frogs, props, animatronics and computer generated images. NOTE: Unsanctioned End Credit American Humane Association monitored some of the animal action and is rating the film "Acceptable." However, in the credits of the film there is an unsanctioned claim that no animals were harmed. This statement was not issued by American Humane Association and as such does not indicate an endorsement of the care all the animals received during production. For more stories on animals and their celebrity humans and other movie news go to "Reel Pets" at www.animalfair.com or see Animal Fair Magazine.