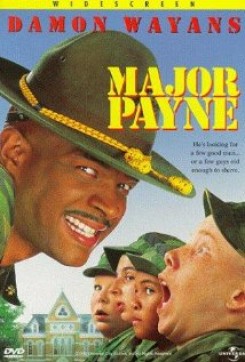 Major Payne is a ridiculous, slap-stick comedy revolving around a very military oriented Major who lives to kill. Once Major Payne's tour of duty is completed he receives an honorable discharge. Unfortunately, he really doesn't know how to live in the outside everyday world. Payne's Colonel does everything he can to find the Major a military position, but the only thing he can come up with is a position as the leader of an ROTC group at Madison Military School. Reluctantly, the Major accepts the offer and proceeds to try and whip these nine young boys, ranging from age six to fifteen, into a fighting military group. Through some hilarious predicaments, the Major finally wins the boys over and he goes on to lead them into victory at the Virginia Military Games.

In one scene a rat comes out of a hole in Major Payne's room. The Major looks at the rat and licks his lips. We then cut to a scene where he is supposedly cooking the rat on a stick over an open fire after catching him. The rat coming out of the hole was merely filmed exiting out of a hole in a fake wall after being placed on the floor by his trainer on the back side of the wall and then retrieved on the other side. It is a fake rat that is seen being cooked. When the Major is about to eat the rat a cat is sitting in his window. The Major hisses at the cat and the cat jumps down. A cat had merely been placed on the window sill for this shot and then called by his trainer, who was out of camera range. In another scene the Major is talking to the principal of the school. The principal sits at his desk holding a magnifying glass and examining a mounted butterfly while 2 large Japanese beetles crawl across his desk amidst various other insects and some bugs fly through the air. The mounted butterfly was a fake butterfly made of crepe paper, which we see only from a distance. The beetles used were placed on the desk by their wrangler and retrieved after the shot was completed. The remainder of the insects were fake. Animatronics were used for the flying insects. In the closing scene the Major is seen with a new group of recruits on the training field. All of the boys have received very short haircuts. A young boy comes out onto the field bringing the Major's dog on a leash. The dog also appears to have a flat-top hair cut. This was accomplished with styling moose placed on the dog's hair to make it stand up straight and was washed out after the scene was completed.