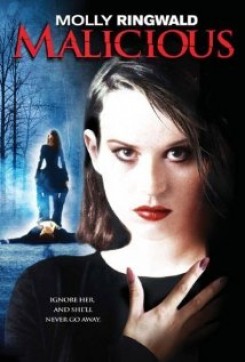 Malicious is a film similar in content and style to Fatal Attraction in which a young man, Doug, puts himself and his girlfriend, Laura, in extreme danger after having an affair with a young woman named Melissa. Doug, a very bright young college man, is striving to be a major league baseball player and Laura, also very talented, is trying to get accepted into Stanford as a journalism major. These two make a perfect pair and are very much in love. One afternoon Laura receives news that the school wants to interview her. Elated, she hurries over to tell Doug of the good news and that she will be leaving for the interview in two days. She finds him in the empty school library and tells him of her exciting news. The two kiss and start to become intimate. Feeling that Doug is going too far with his advances, she abruptly stops him, stating that she wants to wait until the time is right. She says they can discuss the matter upon her return. Doug, although a little miffed and frustrated, understands. While Laura is gone, Doug decides to go to a party given by one of his friends. He arrives, but does not stay long as he feels a little out of place without Laura. As he is walking to his car, he realizes that he has misplaced his keys. Just at that moment a woman in a red convertible drives up. It is Melissa. She offers Doug a ride, which he really has no choice but to accept. While they are driving along, Melissa tries seducing Doug. At first he is quite reluctant, but finally succumbs and the two make love in her car parked on the baseball field. The following day Doug feels a little guilty, but not enough to decline Melissa's invitation to her boat in the Marina. Again, they meet and make love. The following day Melissa calls Doug and asks to meet with him once again. Doug, realizing what he has been doing is wrong, declines her offer, saying he has some studying to do. Unfortunately, Doug does not realize just how wrong this has been and that Melissa, now obsessed with Doug, will do anything, including murder, to make him hers, and hers alone. We watch as this "malicious" woman goes after what she wants with a vengeance to the hair-raising climax.

Doug has a pet cat which is seen napping, being petted and lying on a table. In one scene, Melissa goes to Doug's house and while no one is there, breaks in. She sees the cat, picks it up and pets it. We then cut to the next scene where Laura arrives home after school. She enters the bathroom and closes the door, only to find Doug's, now dead, cat hanging on the coat hook on the back of the door. This was a fake cat supplied by the props department with stage blood applied to it.