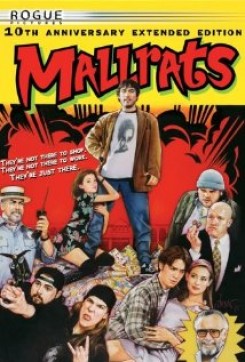 Mallrats is a film about two college students, T.S. and Brodi, and their messed up love lives. When T.S. goes to pick up Brandi, his girlfriend, for their trip to Florida, Brandi tells him that she can't go because she has to appear on her father's game show. This makes T.S. mad. He accuses her father of making her appear on his show because he doesn't like T.S. and wants to end their relationship. Brandi gets furious at T.S. and dumps him for not understanding about her obligation to her father. T.S. then goes to Brodi's house only to find out that he wasn't the only one dumped by a girlfriend that day. Brodi's girlfriend, Renea, left him because all he does is read comic books and play Sega games. After discussing their girl friend problems, they decide to go to the mall to get some cookies. When they arrive at the mall, T.S. discovers that the game show that Brandi is going to be on is airing from the mall. He tries desperately to think of a way to get to Brandi and talk to her about taking him back. When he attempts to see her at the stage, her father calls mall security. T.S and Brodi decide the only solution is to get on the show themselves, but to do that they must get rid of the scheduled contestants. Along with the help of two of their far out friends, Jay and Silent Bob, they get the other two contestants high on pot, which makes them in no condition to go on live television. After T.S. gets on the show and pleads his case with a proposal as a finale, Brandi agrees to marry him. Brodi impresses Renea so much with his show of loyalty to T.S. in trying to help reunite him and Brandi, and his declaration of love before everyone, that she realizes he is the only man for her.

Animal action consists of one scene. When T.S. and Brodi meet their friends, Jay and Silent Bob, they are standing in front of a pet shop window. Jay taps on the glass and talks to four kittens sitting in the window. This was filmed at a local pet shop in the mall. The kittens were property of the pet shop.