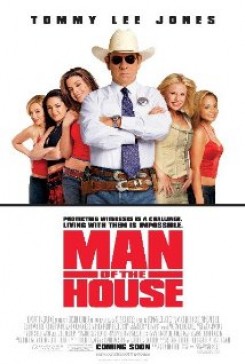 Man of the House

Texas Ranger Roland Sharp (Tommy Lee Jones) is assigned to protect the only witnesses to the murder of a key figure in the prosecution of a drug kingpin — a group of University of Texas cheerleaders. Sharp must now go undercover as an assistant cheerleading coach and move in with the young women.

Before the title credits roll, a man darts into a fenced corral that has a cow inside. The man has a cell phone in his hand and, when actor Tommy Lee Jones approaches him, the phone appears to have vanished. Jones looks around to see where the man has hidden the phone, and then glances at the cow. When he realizes what has happened, he puts on a glove and goes around to the bovine's backside to retrieve the phone.

The action in this scene was done in separate shots with the animal's handler standing just out of frame at all times. To give the appearance of the actor pulling the phone out of the cow's behind, the props crew smeared Jones's glove with faux cow dung made from avocado, molasses, and alfalfa, and the actor simply reached under the animal's tail with the cell phone in his hand.

American Humane monitored a scene with snakes that did not appear in the theatrical release of Man of the House. Production complied with all Guidelines for this animal action.