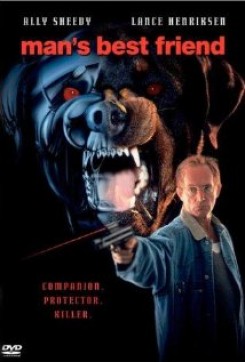 Judy Sanders, who works in a research facility, has contacted TV personality, Laurie Tanner. The plan was for them to meet after work. Judy is going to let Laurie into the research facility to show her the atrocities that go on behind closed doors at EMAX. Doctor Jarrett, who is doing vivisection and genetic altering, discovers the plan and kills Judy. Laurie keeps her appointment, but when Judy does not show, she decides to break into the lab where she finds and films dead bodies and animals that are in the middle of research projects. Among them is a dog named Max, who has been genetically altered with big cats and other exotic animals. While shooting the lab scene, Max escapes. Dr. Jarrett, discovering the filming, chases Laurie out of the research facility. Max follows, and as Laurie drives away, Max jumps into her car. Dr. Jarrett goes to the police complaining that his dog has been stolen. Later that day, when Laurie goes shopping, a thief steals her purse. Max chases him and brings Laurie's purse back to her. The thief is later found dead and Dr. Jarrett verifies that it had to be Max who killed him. Laurie wants to keep Max but her boyfriend, Perry, who lives with her, is absolutely against the idea. He finally agrees, as long as Max remains in the backyard. However, Max, being almost human, understands conversations between people. He also has unusual abilities. For instance, he can unlock doors, open windows, etc. He is also in love with Laurie and a rivalry results between Max and Perry. Max finesses his way into the house, goes up the stairs and peaks through the key hole of Laurie's bedroom, where he sees Laurie making love to her boyfriend. He pounds on the door until Laurie opens it where upon he attempts to attack Perry. All this was shot in cuts with Max responding to visual and hand cues from his trainers with food as a reward. Max, while being a big lovable dog to Laurie, has a propensity, because of his genetic altering, to be a killer. For instance, when the paper boy hits Max in the head with the paper, Max chases him and tears up his bicycle tire. When a neighbor's cat irritates Max, he chases the cat down the street and right up a tree, which he has the ability to do because of his genetic altering with big cats. In a very gory scene, he catches the cat and swallows it. In another scene, Max is maced by the mailman. The mace does not effect Max, but he chases the mailman, jumps over a fence, attacks and kills him. He later tries to bury the body. In the mean time, the jealousy between Max and Perry has accelerated. Max destroys the brake lining in Perry's truck and Perry tries to kill Max with poisoned hamburger. Max, being of super intelligence, realizes the meat is poisoned and instead of eating the meat, he chases the boyfriend out of the house. Laurie, not knowing that any of this has happened, but feeling the animosity of Perry towards Max, feels she must find Max a home. She takes him to a junkyard where she leaves him with the junkyard dealer who assures her Max will be taken to a ranch. Instead, when Laurie leaves, he chains Max and hits him over the head with a shovel, knocking Max unconscious. When Max regains consciousness, he pulls loose from his chain and attacks the junkyard man, who, in turn, puts a blowtorch to Max's face. Max, now terribly burned, escapes and makes his way home to get even with Perry. He climbs the wall of the house, opens the window, and chases Perry, who runs into the closet. Max then crashes through the closet door, attacking Perry, pulls him out into the bedroom and urinates on him. The police, by this time, have heard enough about Max to believe that he is a dangerous dog. They arrive at the house and the pursuit of Max begins. However, Max escapes by jumping over the police cars. In an attempt to get Max back, Dr. Jarrett kidnaps Laurie, hoping Max will follow, which he does. However, in doing so he jumps on the car, causing the car to crash into the front of the EMAX building. Laurie manages to pull herself free from the wrecked car and run into the building. For the first time, Max turns on Laurie and chases her into the lab. His eyes have a glaze to them, and there are scars on his face from the blowtorch. Laurie grabs a knife to protect herself, but in the end, their love for each other is stronger than his propensity for violence and her fear of him. In a very sentimental scene, Laurie reaches out with her bloody hand to touch Max, whom she loves. Dr. Jarrett comes back into the lab and attempts to shoot Laurie, but Max intercedes and takes the bullet himself and is killed.