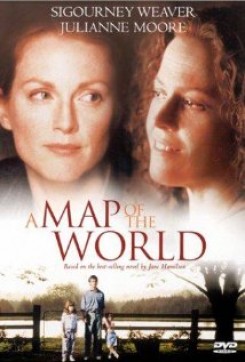 Map of the World, A

A Map of the World is a drama set in rural Wisconsin where a very outspoken mother of two, Alice Goodwin, finds herself misinterpreted by the locals as being unpredictable, if not reckless. When the daughter of her best friend meets with a tragedy for which she feels responsible, Alice is caught in a downward spiral of depression. In the midst of guilt and grief Alice is imprisoned for a crime she did not commit. She almost takes refuge in her incarceration and her journey becomes a revelation for her family, her friends and herself.

Alice Goodwin and her husband live on a dairy farm in Wisconsin where cows are seen grazing and being milked. The film was shot outside of Toronto, Canada on a real dairy farm.

The Goodwins' pet cat appears in several scenes in the film. In one particular scene Alice holds the cat tightly restraining her anger and frustration. She makes a statement about wanting to strangle the cat, but it is quite clear that the cat is in no danger of this happening.

Later in the film the Goodwins go to the Lincoln Park Zoo where a variety of animals are seen in pens. This is also set up as a petting zoo where the children can brush a horse and actually touch a cow and other barnyard animals.

The film was shot in Canada, outside of AHA's jurisdiction.