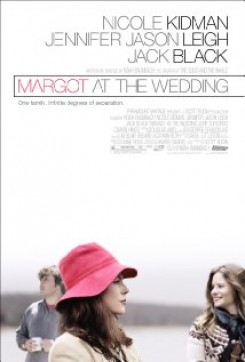 Margot at the Wedding

A mother (Nicole Kidman) in the midst of a troubled marriage takes her son to her sister's (Jennifer Jason Leigh) wedding to spend a weekend reacquainting herself with the dysfunctional family and past that she tried to leave behind her.

In several scenes, a dog runs through a yard, sits with the family and watches the children play. The role of Wizard the dog was played by a cattle dog named Corey. Corey was comfortable with the cast and the required mild actions. The trainer used verbal cues and hand signals as well as treats to encourage and reward the dog. Only necessary cast and crew were on set when the dog was required in the scene.

Malcolm (Jack Black) finds a very dirty and weary Wizard sitting on a rock on the beach. Wizard follows Malcolm up the stairs back to their home. This scene was filmed in separate shots. The trainer placed the dog on his mark on the beach and gave him the verbal cue to "sit and stay". Later, the trainer placed the dog on its mark at the bottom of the stairs and verbally cued the dog to walk up the stairs. Some warm water was applied to the dog to create the worn and wet look. The dog was kept warm and comfortable in between takes and rewarded with treats for the action.

Production provided documentation that a dead mouse and a pig carcass were props.

American Humane did not monitor all of the dog action or a scene with an earwig.