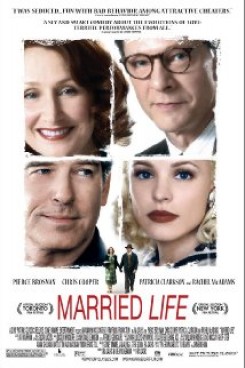 Harry (Chris Cooper) decides that divorcing his wife (Patricia Clarkson) would cause too much humiliation so he plans to murder her instead.

Dog A golden retriever named Bruin played the part of the family dog. The actors were introduced to the dog and instructed on his handling before filming began. To get the dog to perform mild action like sitting or lying, a trainer placed the dog on his mark and stood off-camera using a combination of verbal cues and hand signals. Pat (Clarkson) finds her dog dead and Harry (Cooper) buries it. This dog was a prop made by the production company. Harry calls to his new puppy, who runs over to him and follows Harry inside the house. This scene was shot in separate shots and inserted together in post-production. Hurley, a 4-month-old golden retriever was used for this scene. The actor held a clicker in one hand and some treats in the other and the trainer placed the puppy on his mark right before the camera rolled. The actor clicked the clicker and the puppy ran to the actor and received a treat. Another trainer was just inside the door of the house with a clicker and a treat for the next part of the scene. Due to limited resources or scheduling conflicts, American Humane did not monitor the cat.