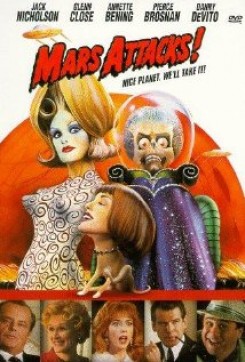 Mars Attacks is a film based on the Topps bubble-gum trading cards of the 1960's. This version is about a group of Martians attacking earth and how the president bungles every attempt at communication.

There is a scene at the beginning of the film where a herd of cows are seen running down the road on fire. For this scene real cows were filmed with optical flames surrounding them. No real fire was ever used with the cows at any time. At the Martian landing site, a man releases a dove as a sign of peace, however, the Martians mistake the gesture and shoot the bird. This scene was shot in cuts using a real and a fake dove. The real dove is released by the trainer and after the establishing shot it is replaced with a fake dove for the shooting segment of the scene. A fake dove is used throughout the rest of the film. Natalie, an MTV reporter is seen standing on her camera van holding Poppy, her Chihuahua, when the van is hit by gunfire. The vehicle topples over and Natalie is seen falling however, the dog is not seen in her arms as she falls. Afterwards, Jason, Natlie's boyfriend, approaches her prone body to assure himself that she is alright. As soon as their hands touch, a Martian zaps Jason and Natalie is left holding his severed hand. Poppy runs into view and grabs the hand with his mouth and walks away. Later a Martian is seen picking up Poppy and taking him and Natalie aboard the space ship. Jerry Ross, the press secretary, is seen entering the Kennedy room with a female, who is actually a Martian. The Martian is seen examining a fish tank full of tropical fish just before she bites off Jerry's finger, spitting it into the tank. A fish is seen circling the finger as if it is nipping at it as it floats in the tank. As the president and first lady are asleep in their bed a Martian enters the bedroom. The family dog is lying at the foot of the bed and a parakeet is in its cage. The dog barks, startling the female Martian and they open fire. The alien fires at the dog and at the bird in his cage, reducing both animals to mere bones. Both animals were placed on their marks by the trainer for the establishing shot and then replaced by fake animals. Optical effects were used to simulate the skeleton of the dog after he is fired upon by the Martian. There are several scenes of Poppy sitting in the actor's lap, lying on a bed, on a couch, or chair, etc. In one scene he is standing on a chair with his paws on the table as he eats from a bowl. For all of these scenes the trainer placed the dog on his mark and cued him with verbal or hand commands. For all of the scenes where Natalie's head is seen on the dog's body, a mixture of live action and visual effects were used. The dog and the female actor were filmed separately and then a visual effects company optically configured the body parts together. Other animal action consists of a deer, a ferret, a squirrel, and some doves seen after the Martians have been vanquished and the earth is restored to normal. The animals in this scene were shot before a blue screen on an interior set and then the shot was inserted during post-production.