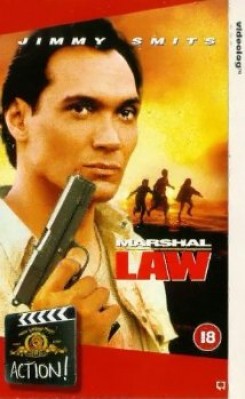 Marshal Law is a film about an ex-marshal, Jack Coleman, and how he saves his two children and a friend from a group of psychopath killers. Jack, has just finished installing a high-tech security system in an exclusive neighborhood in an isolated area of Los Angeles. He has one more thing to do before taking his kids back to Texas for Christmas and that is, to attend the ribbon cutting party for the community. After the party, Jack and his kids stay in one of the empty houses for the night. Unfortunately, during the night the area is hit by a devastating earthquake. While Jack is out inspecting the area, he hears his horse and realizes the animal is loose. When he goes to check on him a girl comes running out of the bushes, followed by a man carrying a gun. Jack notices the mans clothing and realizes that he is an escaped convict. When he tries to help the girl the convict attacks him and they struggle with the gun. The convict is killed and before Jack and the girl can get away a Van pulls up containing the dead mans friends. The leader kills the girl and in the excitement Jack gets away. The chase has just begun as the psychopath killers follow Jack to the neighborhood and begin terrorizing the few inhabitants in the area.

In the opening scene, Jack is seen with a few other men riding horses across a deserted area around the neighborhood. The horse is then seen at the stables as Jack takes his saddle off. There are other horses seen in the background at the stables tied to a hitching post. Later, in a vision that Jack has during the earthquake, the horse is seen running through the forest. The horse is seen again when Jack finds him after the earthquake. As Jack approaches, the horse runs off. The horse is also seen when the girl gets killed by the leader of the thugs. Later, in the same scene, the animal is seen running towards the group, giving Jack an opportunity to get away. All the animal action involving the horse was basic A to B. Other animal action consists of a spider seen crawling out of an air vent when Jack's kids are in hiding and, a crow sitting on a highway sign as the thugs drive towards Los Angeles.