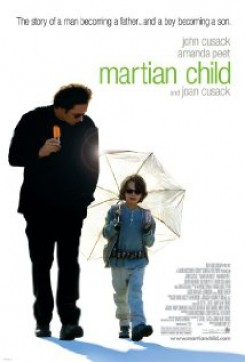 After his fiancé dies, David (John Cusack), a writer, adopts a young boy in order to start a family and try to heal his wounded heart. But the boy (Bobby Coleman) is a troubled soul who thinks he is from Mars.

David (Cusack) has a pet dog that appears in several scenes. A trainer placed the dog on its mark and used a combination of off-camera verbal cues and hand signals to get the dog to achieve such mild action as following actors and lying on the ground or a bed. The actors and crew members were introduced to the dog and were instructed on its proper handling before filming began. In one scene, Dennis (Coleman) enters the house carrying a suitcase and is greeted by the dog, which jumps up and knocks him down. This scene was well-rehearsed and filmed in two separate shots. The first shot was of the dog running up to the actor when he entered the house. A trainer placed the dog on its mark and then verbally cued the dog to run to the actor. The second shot was of the dog jumping up on the actor's suitcase. Trainers cued the dog to jump up on the suitcase, and the actor then fell over backwards as part of a choreographed stunt. The dog was rewarded with a treat afterwards.

The production provided documentation that the dead dog that appears in one scene was fake.

Due to limited resources or scheduling conflicts, American Humane did not monitor all of the dog action or the puppy and the insects that appear in the film.