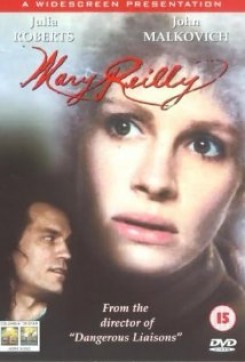 One of many recent Jekyll and Hyde spin-offs, Mary Reilly is the name of a maid in the mansion of Dr. Harry Jekyll. Although there are several other servants in the mansion, Mary seems to be doing most of the work. Whenever something needs to be done, the head of the household calls on Mary. Dr. Jekyll is a single man who has never been married. However, he has an obvious attraction to Mary. One evening while she is in his study, Dr. Jekyll notices several scars on Mary's arms and neck and wants to examine her. Mary declines, stating that there is nothing to worry about, however, she really doesn't want Dr. Jekyll to see that it is teeth marks that have scarred her arms and neck. One morning as she changes the linens on her bed, Mary finds them full of blood. She carefully sneaks down to the laundry room and washes them herself. As she does the laundry, she flashes back to a vision of a creature that looks alive, but covered with blood. As she comes out of her day dream, Mary realizes how safe she feels in Dr. Jekyll's mansion. Very early the next morning, Mary awakens from the same nightmare she'd had the day before. As she lays there in fear, she hears a noise outside her door. It is Dr. Jekyll. He gives Mary a pill and she goes back to bed. The following day the entire staff is called to a meeting with Dr. Jekyll. He informs everyone that he has hired an assistant who will be coming and going at all hours, so they shouldn't be alarmed. His assistant's name is, of course, Edward Hyde. As time goes by, Mary becomes closer to Dr. Jekyll. She often confides in him, much to the doctor's delight. She tells him of her home life as a child and how she was mistreated by her father. If Mary ever displeased him, her father would punish her and send her to a small dark room. He would then release a rat into the room and listen to Mary's screams. All of the scars she has on her arms and neck are teeth marks from the rat biting her. Dr. Jekyll examines her scars and says nothing. A few days later, Dr. Jekyll sends Mary with a note to Mrs. Faraday, a madam in a house of ill repute. He tells Mary to wait for an answer and return immediately. Although Mary knows nothing about the contents of the message, Mrs. Faraday gives her a "yes" answer. As she returns home, she notices Dr. Jekyll's assistant, Mr. Hyde limping down the outside stairs and leaving the premises. That night, Mary has another nightmare "flashback" about her father beating and kicking her on a street corner as she tries to run. The next day, while Dr. Jekyll is out, Mary sneaks down to the laboratory to catch a peek at Edward Hyde. She comes close to getting caught by Mr. Hyde, but is able to take cover before he looks up. After Mr. Hyde leaves, Mary goes to the doctor's desk and snoops through his drawers. A small girl who is crying downstairs alerts Mary in time to once again avoid being caught by Edward Hyde. A few nights later, Dr. Jekyll sends Mary to take another message to Mrs. Faraday. As soon as Mary appears, Mrs. Faraday takes the note and walks her upstairs to Mr. Hyde's room. As they enter, the room is full of blood with a dead rat laying in a pool of blood nearby. Later that evening, Mary once again has another nightmare. This time, however, in the dream she runs into Mr. Hyde who introduces himself and invites her to come into town with him. Mary runs out, goes to the lab, hoping that Dr. Jekyll is there. She knocks and knocks, but no answer. Still dreaming, Mary is in bed with Mr. Hyde who tries to rape her. He rips her clothes off as she screams. Next in the dream, Mary escorts Mr. Hyde to an animal slaughter house where there are buckets of blood. We see cut up sides of beef hanging. Mary watches as Hyde operates on the sides of beef. The next day, while watering in the garden, Mary overhears Dr. Jekyll and Mrs. Faraday arguing loudly in the lab. Mary sneaks back to door of the the lab. She sees Mr. Hyde holding Mrs. Faraday's head. Later, in the next scene, we learn that Hyde holds only Mrs. Faraday's head, the body having been disposed of. A few minutes later, we see Mr. Hyde disposing of Mrs. Faraday's head. Mary walks into the lab and sees Mr. Hyde break a teacup with his bare hands. He sucks the blood from his hand and smears the rest all over Mary's face. When Mary doesn't move, Mr. Hyde asks her if she realizes who he really is. With that, he transforms back to Dr. Jekyll. As she turns away, the doctor grabs and passionately kisses Mary as he says good-bye. He sends her away for fear that Dr. Hyde will reappear and harm her. She cannot go. Hyde reappears and drags her back to the laboratory where he beats her and then kisses her. She is no longer afraid of him as she now knows that Jekyll and Hyde are now one and the same. Hyde puts a knife to Mary's throat. She just stares into his eyes. He cannot kill her. She holds his face. Hyde always knew that Mary would be the death of Jekyll and Hyde and that Jekyll would remain. Hyde injects himself in the neck and soon transforms into a two headed Jekyll and Hyde with one body. Hyde's head shrinks away leaving only Dr. Jekyll left. All of this happens in front of Mary. We learn that Mr. Hyde injected poison into his neck which was the death of him.

In one of the beginning scenes, Mary is sent downstairs to bring a live eel into the kitchen. She is told to leave it there and go on with her chores, however, she can't help but notice that the cook cuts up the eel while it is still alive. The various parts of the eel are still wiggling. What's left of the eel is cleaned and gutted. This scene was filmed in cuts. A real eel, obtained from a riversman at a local lake, was used when Mary brought it into the kitchen. While on stage, the eel was kept in a special tank with actual water from the lake. It was returned to the lake after the scene was accomplished. A fake rubber eel was used as it was being cut up. To make it wiggle like a real eel, the special effects man attached a wire under the table, drilled holes through the top of the table and attached the wire to the rubber eel on top of the table. The man then moved the wires back and forth under the table which created the wiggle. The scene in the slaughterhouse was filmed on a set on a stage, with props made of rubber and plaster to simulate the hanging meat. In another scene, Mary flashes back to her childhood, when in a dark room, she is bitten by a rat. For this scene, we never actually see the rat, as the room is completely dark. The rat sounds were added in post production. The only other scene with a rat was when Mrs. Farraday takes Mary upstairs to Mr. Hyde's room where we see a dead rat in a pool of blood. This was an animatronic rat from the prop department. Throughout the film we see horses with carriages as traveling A to B as background only. The only other scene with animals was a dog in the background in two different scenes.