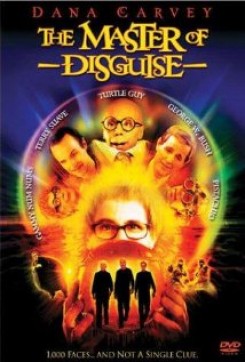 Pistachio Disguisey (Dana Carvey) is the last member of a European family of professional "masters of disguise." When Pistachio's parents turn up missing, Pistachio deploys his arsenal of disguises to locate his parents. James Brolin plays Fabbrizio, the greatest disguise master in Europe and Pistachio's missing father.

Four Border Terriers were on call for the part of Cuteness, Pistachio's canine friend. Only Bo and Monty were used during filming, however. Monty was the stunt dog while Bo, the calmer canine, stepped up for the milder action and close-ups.

In the beginning of the film, Cuteness puts his front paws up on a table and eats food off of a plate. The trainer released the dog from off-camera and used a combination of hand and verbal signals to cue the dog to jump up on the table, where he ate a plateful of doggy treats.

As Pistachio and his young friend Barney talk in one scene, Cuteness runs up to them and Barney pets the dog. The trainer released the dog from off-screen and cued him to run to the actors. There is another scene later in the film where Barney and Pistachio talk to Grandpa alongside the road one night. Cuteness sits on the side of the road and then is shown barking. The road was cleared of all traffic and debris while crew members surrounded the area to form a human barrier. The trainer placed the dog on his mark and cued him to bark from off-camera.

Cuteness bounds inside from a doggie door and sees a huge cherry pie on a table. The dog jumps up on the table and begins sniffing the pie. Suddenly Pistachio emerges from the center of the pie and the dog faints onto the rug below. Suddenly the dog rolls back up onto his feet and runs away. Trainers prepped the dog for over a month in order to accomplish the complex action in this scene. A thick padded mat was placed under the carpet on the floor under the table. Two leashes were attached to the sides of the dog and held by the trainers off camera. This enabled the trainers to lift the dog off of the table gently and bring him to the padded carpet below. Once on the carpet, the dog was verbally cued stay in a lying position. The trainer then cued the dog from off-screen to jump up and run over to him. The leashes were edited out of the film in post production and the tempo sped up so it appeared as though the dog faints and falls off of the table.

In a brief scene, Fabbrizio jumps in his car and squeals away as Cuteness runs out of the house and after the car. The dog was filmed separately from the car sequence and inserted in post production. A trainer released the dog to run out of the house and to another trainer waiting off-screen.

As Barney rides his skateboard, Cuteness walks beside him. Barney takes a tumble off the board and into some nearby bushes where a cat's squeal is heard. A trainer put the dog on his mark and used hand signals to cue the dog to follow Barney on the skateboard. The squeal of the cat was a sound effect added in post production. In the next scene, Cuteness rides the skateboard himself. The trainer put the dog on the board and since the sidewalk was on a slight incline, the board began moving slowly. The trainer walked in front of the moving skateboard at all times. The dog was trained to use his back leg to push the board when it slowed down. As an added precaution, crew members formed a line around the sidewalk while a policeman closed the road to traffic.

Pistachio sits on a bench in the park with Cuteness. Barney throws a Frisbee for Cuteness to fetch but the dog just looks at it and doesn't budge. Cuteness jumps up on the bench by Pistachio and nudges his briefcase with his nose. A trainer put the dog on his mark and stood off-camera using a combination of hand signals and verbal cues to prompt the dog to achieve the action.

During the end credits, Cuteness dances on his hind legs and barks as his name goes up on the screen. Monty the pooch was actually trained to dance on command. A treat and lots of compliments followed his outstanding performance!

As two cows graze peacefully in a pasture, two men run through looking for Pistachio who is disguised as a shrub in the middle of the pasture. As Pistachio emerges from the ground, the men chase after him and they all run past the two cows. A trainer placed the cows in the pasture and they began to graze naturally, seemingly oblivious to the commotion around them.

One of Pistachios many disguises is a snake charmer. As he plays the pungi, a snake pops out of the basket in front of him. Pistachio plays with the snake and it gives Pistachio a big kiss on the cheek. The snake was a puppet specially made for the part and operated by a puppeteer off-screen.

Pistachio eyes a person with long hair walking two dogs on a leash. A trainer gave the actor the leashes of the dogs and the two dogs casually strolled along.