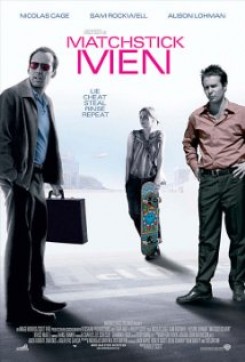 Roy (Nicolas Cage) and Frank (Sam Rockwell) are a team of con artists, aka matchstick men, who suddenly find their business ventures sidetracked when Roy's estranged daughter, Angela (Alison Lohman), shows up in his life demanding that Roy make up for lost time.

Roy knocks on the door of someone's house and a dog barks from inside. Later, a Golden Retriever named Otis barks and paws at the sliding glass door. A woman opens the door and Otis runs outside. Otis was played by canine star, Ted, who was cued to bark and scratch at the door by an off-camera trainer.

At a park, a woman walks two dogs on leash while another dog catches a Frisbee. The dogs belonged to the actors that interacted with them in the brief scene.