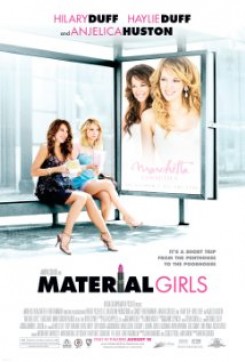 Ava and Tanzie Marchetta (Hilary and Haylie Duff), heiresses to their family's cosmetics fortune, are living the good life without a care in the world. But when a scandal involving one of their products emerges, the girls may lose everything. Can they save the company and clear the name of their late father, or will they take the easy way out and sell the business?

In one scene, some kids open the door and find two rottweilers snarling and growling. They close the door and run up to the building's roof, where the same two rottweilers are seen at a distance in a fenced area. The dogs were placed on their marks and an off-camera trainer used a combination of hand signals and verbal cues to get the dogs to growl and bark.

Two riders on horseback ride alongside a road as the girls drive by. The street was closed to all traffic, and the car was not near the horses at any time. These riders were ranch hands who worked at the facility where the horses lived, so they and the horses were very comfortable with one another and with the natural actions they performed.

In one scene, a cat jumps onto a couch near a kissing couple and then onto a nearby desk, on which there is an open box of pizza that the cat begins to eat. A trainer placed the cat on mark and used a bait stick to get it to jump onto the furniture. Some baby food was smeared on a fake pizza to entice the feline to nibble at it.

One character in the film has several cats that wander and play inside her house. Various cat toys and furniture were placed throughout the set for the cats to enjoy. Eleven cats were on call for this part and six were filmed at a time. Trainers positioned each cat on its mark and used verbal cues and food rewards to get the felines to achieve the mild action.