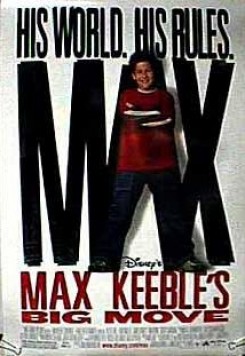 It's a war zone at Curtis Junior High-one bully will steal your lunch money while another one throws you in the dumpster. Facing the brunt of this torment is young Max Keeble, a clever paperboy who decides to take revenge on his bullies only when he learns that his family is moving away. Yet an unlucky turn of events finds Max staying-put, and he is left at the hands of his merciless foes.

Come to my Window

There is a scene in a classroom where the teacher opens a window and a very pretty bird flies onto the sill and then onto the teachers extended arm. The bird was a Mexican Blue Jay and was accompanied by two trainers. One trainer released the bird who flew to the window sill and then when the actress held her arms out, the bird flew to her. The other trainer stood off camera and retrieved the bird when the scene was over.

The scenes that take place at the animal shelter are really at a petting zoo; the animals in the pens in the background actually live there. At one point in the film, the evil principal bulldozes through the entry of the shelter, as the panicked animals run away. The bulldozer was filmed separately—away from the animals—and edited in later in post-production. The herd of animals swarming out of their demolished homes was actually filmed one species at a time. The trainer released the animals, which then ran to another treat-wielding trainer standing off-camera. The scene where the animals chase the principal through the parking lot of the school is filmed in the same way. Production edited the scenes after filming to make it appear as though many kinds of animals were running all at once.

A squirrel climbs in a window and onto a counter in a classroom in one scene. The squirrel hops over on a bookshelf and jumps onto the principal's back-eventually getting inside his suit. The principal shakes and moves trying to get the squirrel to jump down. The squirrel then runs along the floor and under the bookshelf-a safe distance from the angry principal. Three trainers accompanied the squirrel to the set. One trainer released the squirrel, which climbed into the window and onto the counter. Buzzers were hidden in various places on the set by the trainers before filming began to prompt the animal in a certain direction. Another trainer stood off-camera holding a peanut-butter-coated stick to motivate the squirrel to jump onto the bookshelf and the actor's shoulder. Once the squirrel was comfortable with the jump onto the shoulder of the actor, a trainer placed some peanut butter inside of the jacket the actor was wearing and the squirrel began to poke its head inside the jacket, making it appear as if it goes inside. The squirrel was not actually in the jacket when the actor jumps around and slams into the shelf.

A chimp sits in a cage at the shelter. Suddenly he swings open the door of the cage and runs free. The chimp also makes an appearance in the school cafeteria. The peppy primate jumps from table to table and then onto the back of the principal. He knocks him down to the ground and jumps up and down on his back. For the scenes in the cage, the trainer put Jonah the chimp on its mark and used a combination of verbal cues and hand signals to get the animal to achieve the action needed. Thick padded mats were placed around the tables that the chimp jumps from in the cafeteria scene. One trainer released the chimp while other trainers stood by each table using hand signals to get the chimp to jump from table to table. The chimp was then cued to jump onto the actor's back, where it merrily jumped up and down. The chimp had more fun than the actor in this particular scene.

Ever the adventurer, Max gets to ride an ostrich in one heroic scene. A harness was hooked up to the ostrich and trainers surrounded the animal holding onto the harness ropes. A corridor was specially made with large potted trees, shrubs, and hay to further protect the animal by acting as a safety barrier. Four trainers held the ostrich in place while a stunt person attached to a cable was placed on the ostrich and then pulled off. This part of the scene was filmed in front of a blue screen while the rest of the scene was filmed in the corridor.

In the beginning sequence, a Golden Retriever dog catches a newspaper in it mouth, a specialty of the trained dog. In other scenes, Max's pet lizard—a Bearded Dragon—either hovers in the background of his terrarium chewing on reptile grub, or hangs out on Max's shoulder.