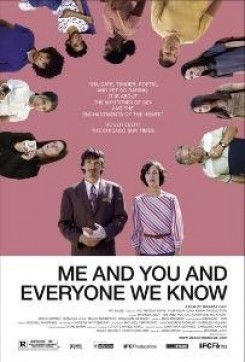 Me and You and Everyone We Know

John Hawkes stars as divorced shoe salesman Richard Swersey. When this father of two precocious boys meets Christine (Miranda July), a quirky performance artist, he struggles to overcome his fears and make a real connection with someone for the first time in his life.

When Richard looks out the window in one scene, he sees a bird sitting on a tree branch. A trainer placed the bird on the branch and stood nearby to retrieve it after filming was completed. This action was shot separately and inserted into the film during post-production.

In one scene, a goldfish swimming in a bag of water is placed on the family car. Forgetting all about his finned friend, the driver takes off and the bag falls onto another car and eventually lands in the street. Production used a real fish for the first shots of the bag on top of the parked car. For subsequent shots, a fake fish was placed inside the bag that fell from the moving car and onto the ground.