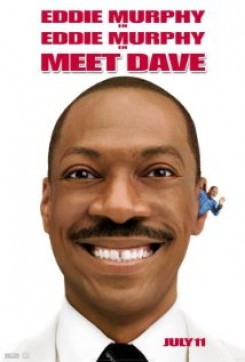 Tiny aliens from another planet have created a spaceship that looks and acts just like a human. Several of these aliens serve as the ship's crew and immerse themselves in Earth's culture as part of their mission to save their own planet. But their mission goes awry when their ship falls for a beautiful Earth woman (Elizabeth Banks).

Josh (Austin Lynd Myers) has a goldfish in a bowl near his bed. A fireball from space comes through the window one night and lands in the bowl. When Josh looks into the bowl afterward, the water is drained and the fish is gone. The goldfish was supplied and maintained by a reputable fish store. A fake fish was in the bowl for the fireball portion of the scene.

When a cat approaches Dave's (Eddie Murphy) legs, Dave kicks it, sending it into the air and out of frame. After one trainer released the cat from its crate, another trainer hiding behind the actor used a buzzer to get the cat to approach the actor. The cat then naturally rubbed against the actor's leg. For the kicking action, the cat was removed from the set and replaced with a stuffed animal prop, which is what flew through the air.

After sniffing Dave's body, a dog lifts its leg, appearing to urinate on the tiny alien people. This scene was filmed in separate shots. An off-screen trainer verbally cued the dog to sniff around the actor. The trainer then cued the dog to lift its leg (which it had been trained to do on command) and he held the dog's leg up, moving it slightly to make the dog appear to be urinating. This was filmed in front of a green screen so that the urine and the little aliens could be added in later.

American Humane also monitored a scene with a rat that was cut from the theatrical release.