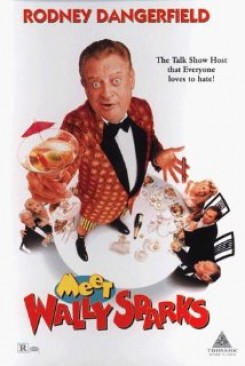 Meet Wally Sparks is a film about Wally Sparks, a talk show host, known for his crazy guests and his crude/rude behavior, on and off the camera. Even though he is hated by the elite society, he is loved by the laborer. After his latest show, about a man in love with his dog, Wally receives word from upstairs, informing him that he has one week to change the shows format, or be canceled. Later that day, Wally is shocked when he receives an invitation from his biggest adversary, the governor of Georgia, inviting him to a society ball at the governors mansion. Wally's producer, Sandy Gallo, thinks that this is the perfect way to show the station owner, Mr. Spencer, and the public, that Wally Spark's can be an up-standing citizen when he wants. He accepts the invitation and journeys to Atlanta Georgia. Upon arriving at the ball, Wally and Sandy part company to mingle. What starts out as a quiet evening of fun turns into a chaotic adventure, as Wally's best behavior is too crude for this crowd. When he needs a breath of fresh air, he heads for the stables where he shares his whisky with a white horse. After the two animals, human and horse, become inebriated, Wally rides the horse through the open patio doors and into the house. When the party is over, Wally, unable to walk, is bedridden in the governor's mansion. Of course, he is faking the injury in order to convince the governor to do his show. While indisposed, he tapes a show from the mansion and his guests are two groups of wrestlers, one pair enters the set carrying a python. During taping, Dean, his son, arrives at the mansion and brings with him Wally's dog, Egypt. Shortly after their arrival the two groups of wrestlers get into an argument and a fight starts. The end result is pandemonium and total destruction of the room at the mansion. In the meantime, Miller, Mr. Spencer's assistant, also travels to Atlanta. Convinced that Wally is faking his injury, Miller tries everything from climbing trees outside his bedroom and even breaking into the house, just to get a picture of Wally standing. Wally's deceit is finally uncovered while taping a show with the governor on national television. He finds out that the governor is being blackmailed and devises a plan to rescue him. Wally uncovers the plot of blackmail and all of the principle characters involved by showing a video tape of the blackmailers on live television, exonerating the governor. In the end everyone is happy and Wally is given a second chance with his show.