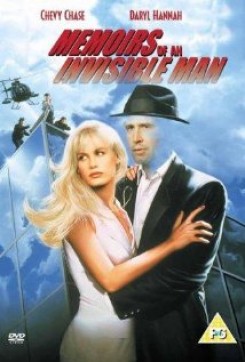 Memoirs of an Invisible Man

Memoirs of an Invisible Man is a zany story of Nick Halloway, an irresponsible businessman in advertising. Nick has a habit of slipping away from the office and his responsibilities on a daily basis to patronize his favorite club, "The Academy". While indulging in some spirits, Nick meets Alice Monroe and instantly falls head over heels for her. When Alice is unable to dine with him that evening, he does a little over-indulging to sooth his bruised ego. The next day, with his extensive hang-over, Nick attends a meeting at Magnascopics Laboratory. During the lecture he excuses himself and finds a private sauna in the building to lay down in for a couple of minutes. As he does, there is a terrible explosion which renders him unconscious. When he comes to, he realizes he, along with parts of the building, has become invisible! Nick leads us through his hilarious escapades as he tries to escape from the hands of a C.I.A. agent gone bad who wants to use Nick's invisibleness for his own monetary gain.

Although there was quite a bit of animal action filmed in the making of this movie, the majority of it was cut from the final film. Remaining animal action is mild. In one scene five bloodhounds on leashes are seen leading policemen in pursuit of Nick. In another scene a dog and a cat are sitting on the lawn watching Nick play tennis.