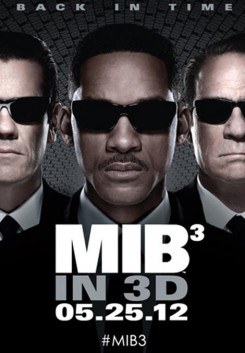 In this third installment of the popular series, Agent J travels back in time to the 1960s to save his partner Agent K from destruction of an alien force.

In the scene where a fight breaks out in the kitchen of a Chinese restaurant and chickens are milling about in the background, the trainer was just off-camera to wrangle them in case they got in the way of the actors. The chicken in a crate in the background was immediately taken out of crate after completing the scene, and the chicken flying onto the food prep table during the fight was filmed separately, so it was never near the actors.

In the party scene where a man leads a zebra through the crowd, the zebra was actually a pony with zebra stripes painted on him. The pony was accustomed to the procedure of being painted like a zebra with safe non-toxic paints. The actor led the pony through the party of people with trainers just off-camera.

The scenes with the butterflies were done with CGI.