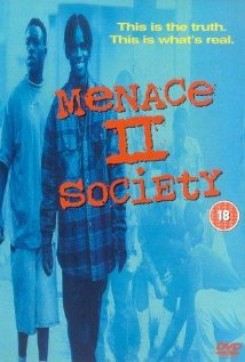 Menace to Society is an extremely violent film with a great deal of obscenity portraying the life of one particular black youth, Kaine, as he grows up in the streets of Los Angeles. Kaine's father is murdered in a drug deal when Kaine is 10 and his mother dies of a heroin overdose when he is 14. With life starting out in such a manner, Kaine is a natural for street life. He lives with his Christian grandparents, but they can do little to deter Kaine from hanging out with the seedy characters in the local hood. We watch as Kaine becomes increasingly involved in all aspects of illegal dealings, including murder, with the outcome being what is expected, a tragic ending.

Animal action is limited to one scene in which Kaine and a companion are in the process of stealing a car when the police arrive. The boys jump out of the car and run down the ramp of the underground parking lot, hiding behind one of the cars. The police get out of their car with a K-9 cop. They let the dog off the leash and he runs down the ramp, finding the boys behind the car. The dog's trainer was actually behind the car and the dog merely responded to his trainer's calls to come.