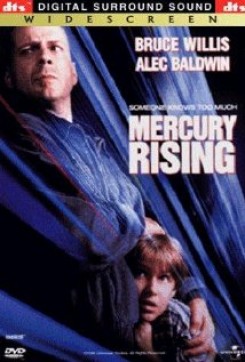 Mercury Rising is a film about Simon, a young autistic boy, who inadvertently breaks a secret government code. The government tries to cover up the breach in security by killing Simon and his family. After Simon's mother and father are found dead, his only chance of survival is the protection of a burned out FBI agent, Art. Unfortunately, no one believes Art when he tells them that the death of the boy's parents was not due to a burglary.

There is a scene in the rain where a dog jumps up to a car window and starts barking and growling. A man whistles to the dog and he runs from point A to B. The man tosses something through the air and the dog runs to fetch it.