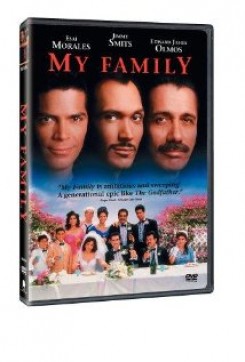 Mi Familia is Paco Sanchez's story of his family, beginning when his father first came from Central Mexico in the 1920's. It takes Paco's father, Jose, just about one year to walk to his new home where he stays with his Uncle El Californio in East Los Angeles. Because his Uncle had been born in Los Angeles when it was still Mexico, El Californio gets his nephew, Jose, a job immediately. Things were good - exactly what he had expected. While trimming some bushes, he meets and falls in love with Maria and they are married. Two years later they have two beautiful daughters, Irene and Antonia, and another one on the way. While she is out shopping one day, during the depths of the depression, INS authorities sweep through the Latino communities rounding up illegals and citizens alike and sending them back to Mexico. Among them is Maria, still pregnant with her third child. Maria is able to stay with her Aunt until she gives birth to a baby boy named Chucho. Maria then works to get enough savings to go back to her family in East Los Angeles. On her way, she comes to a rapidly moving river and insists on going across on a rickety raft. She is swept away by the current. She loses the baby and frantically looks for him while still in the river She finds Chucho, but he is very sick and barely survives. Eventually mother and child are safely reunited with the rest of the family. Through the years, Jose and Maria have three more children, Paco, Memo and Jimmy. Chucho grows up and becomes involved with some gang members. It is just a matter of time before tragedy follows. After accidentally killing a rival gang member in a knife fight at a school dance, Chucho goes into hiding. The only member of the family to know where he is, is his little brother, Jimmy, who has always adored and idolized Chucho. The police are told that Chucho is armed and dangerous and to shoot if necessary. When a couple of cocky rookie cops see Chucho, they shoot him in cold blood, as Jimmy stands in shock. Some years after, Toni who is a nun, comes home for a visit. The family is shocked when she announces she has left the convent. They are even more shocked when Toni tells them she has married a former priest, who obviously has left his order. Toni and her husband David open a clinic in the area to help the people with whatever problems they might have. In the meantime, we see that Jimmy has grown up a bitter, angry man, convinced that he has nobody and that he must do whatever he can to survive. He is incarcerated for dealing marijuana. After he is released, his big sister Toni tells him of Isabel, one of Toni's clients. It seems that Isabel is about to be deported unless she marries an American citizen. Toni begs Jimmy to marry Isabel in name only, promising him that he doesn't have to be involved with Isabel. Jimmy agrees, but Isabel refuses to leave him alone, demanding that since he married her, they should stay together. After awhile, Jimmy and Isabel become good friends, and then lovers. Isabel becomes pregnant and Jimmy becomes responsible, going to work to support his family. After Isabel dies giving birth to their son, Carlito, Jimmy is enraged and refuses to have anything to do with him. Jose and Maria take Carlito and raise them as Jimmy's nephew. A few years later, Jimmy is ready to accept his son, but Carlito refuses to have anything to do with him. After a great deal of heartache, however, they finally become a family.

Animal action is mild. A white owl comes to Maria whenever there is trouble about to happen. The owl was simply placed in position by the handler and given verbal and visual commands. In a couple of scenes, we see the farmers with oxen pulling their plow in the field. In other scenes we see a horse eating some grass and a couple of mules tied to a hitching post. Dogs are seen in the background. Three goats and some chickens are also seen in the yard of El Californio.