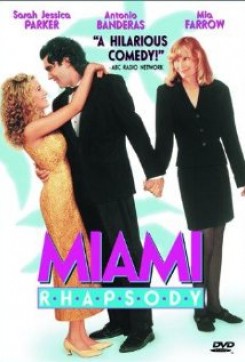 Miami is an offbeat, almost dark comedy. It is the story of the members of one large family who are not happy with their monogamous marriages. It begins at the wedding reception of Jordan and Terri. Gwyn, an advertising executive, who is Jordan's sister, attends the wedding with her fiance Matt, a veterinarian at the Miami Zoo. Although they have been living together for some time, Matt proposes to Gwyn at the wedding. At one point during the wedding reception, Gwyn is alone with her father, Vic. Vic tells her that he suspects her mother is having an affair. Gwyn thinks it is his imagination until her mother confirms his suspicions a few days later. It seems that her mother has become intimate with Antonio, the gorgeous young Italian hunk who is Grandma's nurse. One night after she visited Grandma Mom was lonely and didn't want to go straight home since Vic wasn't home anyway. Mom is also convinced that Dad has a girlfriend on the side. A few months after their wedding, Jordan and Terri start fighting, so Jordan sleeps with his best friend's wife. Gwyn's sister Leslie has gone back to her former boyfriend for a roll in the hay. Leslie's husband Jeff is a professional football player and has numerous affairs on the road. And, of course, Vic really has been sleeping with his secretary, Zelda, who threatens to tell his wife. With all of the chaos happening within her family, Gwyn and Matt decide to call off their wedding plans. Matt has been offered a job in New York, so prepares to leave. In the meantime, Mom decides to call off her affair with Antonio and get her marriage back on track. Now Antonio and Gwyn get together, even though he is still in love with her mother.

There is a scene in the movie which has Matt and Gwyn swatting mosquitos on the beach. In reality, there were no mosquitos even present - merely the buzzing sound effect. In another scene, Matt reveals a dead mosquito in his hand. The squashed mosquito was a fake, and partially drawn on his hand. In another scene, Gynn is at the zoo to speak with Matt, who is carrying a baby chimp. As they walk along, the chimp grabs Gwynn's hand. The actress simply held out her hand to the chimp, who grabbed it. All of the other animals were residents of the Miami Zoo.