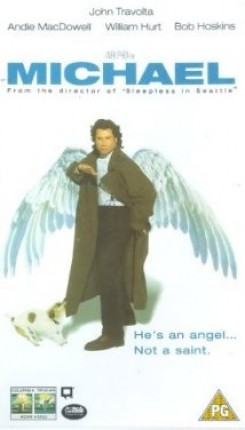 Michael is a romantic comedy about a promiscuous angel named Michael, and his last mission on earth. Michael's mission is to get Quinlan, a tabloid reporter, and Dorothy, a dog trainer, to fall in love with each other. Through a series of events, which results in Michael's eventual demise, he is successful.

There is a scene where Michael sees a bull in a field and decides to fight him. The bull is seen pawing the ground right before Michael and he charge at each other. This scene was shot in cuts. A real bull, a soft fake bull's head, and an anamatronic bull were used. The real bull was used for the establishing shots of the bull in the field and the charge scene. The bull and actor were not filmed at the same time. An anamatronic bull is used when the actor's head and the bulls head supposedly make contact and when the bull is seen sitting on his rear legs, as if he is dazed. When Sparky, the tabloid owner's dog, is hit by a truck, he is seen running from A to B towards the road and then a thud, followed by yelp, is heard as the truck supposedly hits the dog. The dog is then seen lying in the road where Huey, a reporter, picks him up, cradling him in his arms. Huey then hands the dog to Michael where he proceeds to bring life back into the animal by enfolding the dog's body in his wings. This scene was shot in cuts. The truck and dog are never in the same frame. A prosthesis dog was used for the portion of the dead dog. The real dog is established running A to B and coming to life in the actor's arms. There is a scene at the tabloid office, where Sparky is seen grabbing a rug as if he is fighting with it. Then later he is seen grabbing a piece of wood between the legs of a chair. The dog eventually breaks the piece of wood off and is next seen growling and wagging his tail at Malt, the owner of the tabloid. The cross section of the chair was made out of balsa wood. The dog naturally likes to tug on objects, so the trainer gave him a verbal command and he grabbed at the wood, breaking easily. On two occasions the dog is seen jumping into Huey's arms. The first time he jumps from the bed to the actor's arms and the second time from the ground into the actor's arms. The trainer merely cued with dog with verbal and hand commands. There are several scenes where Sparky is seen sitting in the car, on a bed, walking A to B with an actor, rolling in the grass, being carried by an actor, grabbing a pant leg, etc. For all of these scenes the trainer merely placed the dog on his mark and cued him with verbal and hand commands. Other animal action consists of a cow seen in the background, five dogs on leashes sitting in a park with an actor, and three geese seen flying in the air.