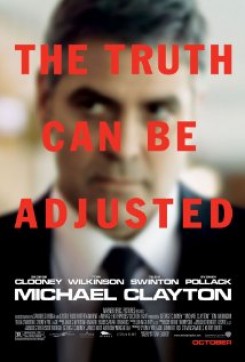 Michael Clayton (George Clooney) is known in law firms as being a "janitor" who cleans up people's legal messes. But when he unwittingly becomes immersed in a multi-billion dollar cover-up, his role becomes much more pivotal.

Three horses stand in the background in a field. Michael (Clooney) approaches them and stands a few feet away, staring at them. Moments later, Michael's car explodes in the background, causing the horses to spook and run off over the hill. This scene was filmed in separate shots and edited together in post-production. To get the three horses to stay still in the beginning of the scene, wranglers placed feed down and fastened the horses' front legs together. Trainers released them immediately after filming and walked them back to their corrals. For a close-up angle of a horse's head reacting to the explosion and exiting the camera frame, a horse was filmed in front of a green screen. A wrangler placed the horse on its mark and held it there. A second wrangler gently tugged the horse's tail to make it suddenly look in a certain direction. A third wrangler controlled the horse's front leg with a rope, then released the rope and gently patted the horse's rear end for the quick exit. The horses were never near the actual explosion; it was added in later. To get all three horses to suddenly run off over the hill, off-camera wranglers gently patted their rear ends. Wranglers stood just over the hill to retrieve the horses. The remote location was secured, and wranglers on foot and horseback were nearby as a safety precaution.