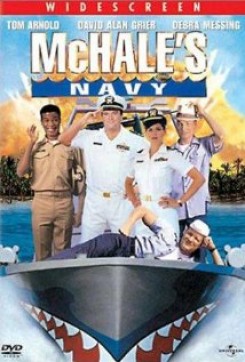 McHale's Navy is based on the hilarious Television series about McHale, Ensign Parker and Captain Bingington. In this episode, McHale is out of the Naval service and running a black market business in and around the islands. He is informed that a terrorist group has set up headquarters on the island he inhabits and have threatened the local villagers. McHale, while in the Navy, had prior dealings with the terrorist leader and therefore knows the extent of the man's villainous acts. Eventually, the Navy requests McHale's help and through his assistance they are victorious.

There are a few scenes involving a pig on the island where McHale lives. In one scene McHale arrives home and the pig is seen running towards him. McHale picks up the pig and the two get into a crate attached to a pulley. Then arriving at their destination, McHale is seen putting the pig on the ground. Then in another scene, the pig is seen running out of McHale's hut just before it explodes. McHale grabs the pig and runs towards the crate, cutting the rope and quickly sliding a short distance to the ground. Arriving at ground level, McHale places the pig on the ground and he is seen running towards some goats and into the bushes. The pig and goats are later seen walking among the debris of what is left of McHale's home. These scenes were shot in cuts. For all of the scenes involving the pig, the trainer placed the pig with the actor or on his mark and retrieved him at completion of the shot. Other animal action consists of a monkey seen playing in the background throwing dice with a local officer. There are a few scenes where a couple of goats are seen grazing in the background or tied to a post on McHale's island. The majority of the animal action was filmed in Mexico. American Humane was present on set for the pick-up shots of the pig filmed in Los Angeles. After conferring with the production company and trainer, we are rating McHale's Navy "Acceptable".