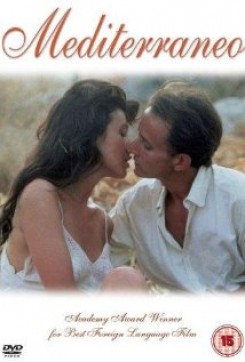 This Italian film made in Greece, with a World War II setting, is a bitter-sweet comedy about a group of soldiers who land on an Isle in Greece. They have come to capture and protect the Isle from the Germans. When they first arrive, they think the Isle is deserted, but after a few nervous days and nights the soldiers hear music. They discover a small group of people, all women, children and old people. The young men had been taken captive by the Germans. The natives begin to trust the soldiers and take them in as their own. The soldiers soon forget that they are soldiers, as they live happily on this beautiful, peaceful, perfect Island. Time continues to pass until one day an airplane in need of repair lands on the snowy white sands of the beach. After the repairs are made the men invite the pilot to dine with them. While having general conversation, the soldiers discover that they have been on the Island for an entire three years! As the pilot departs he informs the men that he will send someone back for them and return them to their home in Italy. This brings mixed emotions for all six men. Shall they obey their country or their hearts?

One of the men has a pet donkey. The donkey is seen riding in the boat from the ship to the island. After the men are on land they cautiously approach the main town. There are several chickens nesting on a ledge at the side of the road. One of them jumps up and startles the men who immediately open fire, killing the chicken. This scene was .................................. After the men can find no one on the Island, they set up guard posts and pass words. As evening falls, three of the men hear a noise, they call out for the pass word to be given, but there is no response. They hear more movement and open fire. When the gunfire stops and the smoke clears one man lets out a blood curdling scream and runs over to find that it was his donkey that the men shot, and he is lying dead in a pool of blood. This scene was shot in cuts. We never see the donkey in the same scene where the men are firing their guns. In one scene one of the men goes down to the water's edge to go fishing. He pulls out a granade from his pocket and tosses it into the water, causing an explosion. In another scene a woman is seen sitting on the porch in front of her home beating an octopus on the stairs to tenderize it for the evening meal. Other animal action consisted of a herd of goats grazing on a mountain side, a woman riding on a donkey, the donkey eating grass and gulls flying.