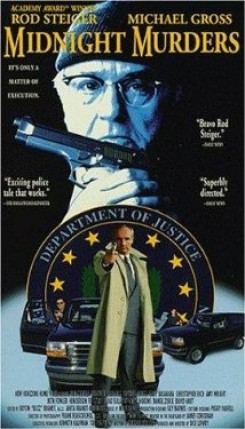 In this made for television movie, Rod Steiger plays Gordon Call, released from prison after serving one year in Leavenworth for tax evasion. If he wasn't before, he definitely is now, a religious fanatic, a white supremacist and completely opposed to any kind of government taxes. Upon arriving home in Fargo, North Dakota after his incarceration, Gordon kicks his wife out for borrowing money from her brother for the lien on the house. He becomes a member of a local chapter of men who do not recognize any government laws, but tend to make their own local laws. They also take the liberty of policing their own town along with the Sheriff, who feels he has no choice but to go along with them. Gordon takes their policies several steps further, including white supremacy. One year later, several local farmers are forced out of their businesses and homes as they are unable to make their payments. There have been several farm auctions. Always ready for a fight, Gordon is around to cause any trouble he can for the government. By this time, Gordon has again not paid taxes and is again wanted by the Feds. The Feds get word that a meeting is taking place near the church, and they move in to arrest Gordon. One of the members steps out for a cigarette and spots Leland Winters, a deputy sheriff, staking them out. Gordon has already been made aware by the Sheriff and is ready for the raid with his shotgun in hand. It becomes a real contest of wills as Gordon and his men battle with the Feds. In the end, two law enforcement men are killed and three others wounded, including Gordon's son . Gordon still believes what he is doing is right, in spite of his son's wounds. He steals a police car along with one of the members of the club and goes into hiding. The FBI starts a nationwide search for Gordon. The search ends in a small town in Arkansas in the home of an old couple who have been hiding Gordon. After getting the couple out of the house, an entire army of state and local police, along with the FBI, go in for Gordon. The only way all of these law enforcement agencies can get to Gordon is to bomb the house, which finally kills him. They wanted him alive to stand trial. Instead, Gordon dies a martyr.

After Gordon has escaped in the police car, several law enforcement officers head up to his home, calling to him with the bullhorn. Gordon's dog is in the fenced yard barking ferociously. One of the police gets sick of hearing him bark and fatally shoots the dog. This scene was filmed in cuts. The dog was not present when the policeman actually fired the gun. He had been trained to play dead and did so for this scene after which he was rewarded with food. Throughout the film there were cows and/or horses in fields used as background. In a couple of different scenes a dog is also seen in the background.