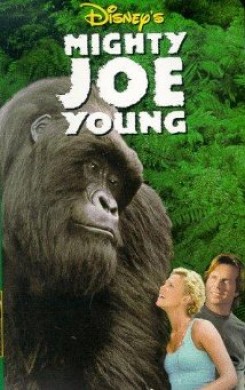 After Mighty Joe Young is brought to America for safety reasons, he escapes and rampages through Hollywood, spurred by tormentors out for revenge.

All of the gorilla scenes were accomplished with animatronics. There is a scene in the jungle where a leopard is in a cage and a man is extracting DNA from him by sticking him with a DNA plug gun. This scene was shot in cuts. The leopard was prepped prior to filming to be touched by a fake dower rod. It was very dull and disappeared back into the tube when making contact with the leopard's hide. Other animal action consisted of hounds on leashes running through the jungle, roosters, chickens, and other farm animals in the background at the local village, and monkeys in trees in the jungle. Also at the reserve, yak, zebras, and giraffes in the background. There is a scene in the states at the wildlife reserve where an actor holds a monkey.