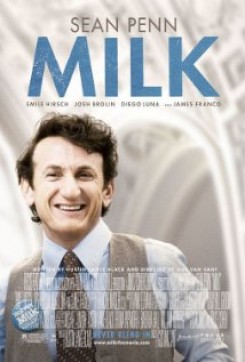 Harvey Milk (Sean Penn) was the first openly gay elected official in California. This biopic reveals his experiences in and out of office, including the influence he made on the city of San Francisco and the resistance he received from his opponents — ultimately leading to his assassination by a fellow politician.

Harvey Milk's (Sean Penn) pet dog is seen throughout the film, either in the camera store that becomes his campaign headquarters or in his house. The dog is lying or sitting or being petted by various actors. The cast and crew were introduced to the dog and instructed on its proper handling before filming began. The areas were inspected for safety ahead of time and the set was limited to only necessary cast and crew. A trainer placed the dog on its mark (either on the floor or on a piece of furniture) and cued the dog to stay. The trainer then stood just off-camera and used hand signals or held up a toy to get the dog to look or walk in various directions. Actors also kept treats in their pockets, which trainers called to the dog's attention.