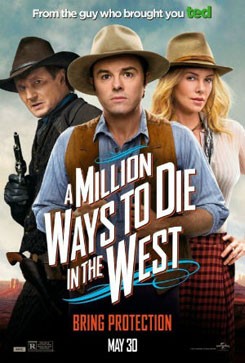 Million Ways To Die In The West, A

In the tradition of comic masterpieces like Blazing Saddles, MacFarlane takes on the Western genre, showing how many ways someone can die in that brutal pastime.

All horseback riders were stunt riders or experienced actors who were skilled at riding, mounting and dismounting. All running/galloping scenes were well choreographed, and actors used caution while on and near animals. The horse(s) rearing was a trained behavior. When teams of horses pulled wagons or carriages, the drivers were experienced and teams of horses were familiar with each other and accustomed to the pulling action. Whenever horses or burros were seen tied to posts/fences, they were attached to lead ropes tied to posts.

In the scene where the lead character drives a horse drawn wagon between a herd of sheep, trainers placed food in the select area. Sheep were never in front of the carriage, only surrounding the wagon.

In the scene where we see pigs in the corral in the background, between takes trainers provided them with water and shade. This also occurred for the scene with the pigs at the fair.

In the scene where two wolves drag a dead body into an alley, the wolves latched onto a dummy, which was attached to a cable. The cable pulled the fake dead body.

When the lead actor drunkenly gets on a horse and rides off, the wranglers were off-camera holding the reins of the horse as the actor carefully mounted the horse. The wrangles then backed away as the actor turned the horse in a circle and rides to a certain point at the end of town. In the same scene when the actor falls off the horse, a stuntman ran fifteen feet to where the horse was hitched, got on the horse, and quickly fell off.

In the scene where we see an overgrown sheep with long hair walk into a wall, a special effects camera was placed on the ground. A trainer held onto the real sheep with a leash in front of the camera. On action the trainer walked the sheep to the wall. As the sheep reached its mark, the trainer gently pulled back on the leash to make it look as though the sheep bounced off the wall after running in to it. Then a wool ball was mounted on a cart with wheels. On action, production pushed the wool ball into the wall. The rest was accomplished in post-production with CGI.

In the scene where an old man drives a mule-drawn wagon accompanied by his dog in the front seat and is stopped by a gang of thugs and they kill the old man, trainers stood off camera and called the dog after the prospector is shot (squib on actor, no real gunfire). On a cue the dog licked actor then followed the horses out of the camera frame.

In the scene where an enormous piece of ice is lowered onto the back of a wagon and the ice falls and kills a man, wranglers placed the wagon under a huge piece of ice, and lowered it onto the wagon. On action the wagon pulls out from underneath the cube of ice, camera cuts, and resets (3) more times camera shoots the same action. Special effects took over for the ice crushing the worker. No animals were near the ice falling onto the ground.

Throughout the film, the actress has a pet dog seen performing such mild action as sitting/lying/sniffing, being petted, and walking/running on or off leash. For all of these scenes, trainers used hand signals and verbal commands to cue the mild action, which the trained dog was accustomed to performing. The barking was also a trained behavior.

In the scene where a rattlesnake slithers over actor's feet, trainers placed a dummy of the actor on a ledge in a sitting position. On action, the wrangler placed the snake in a position so it would crawl over the foot of the fake dummy.

In the scene, where the actor rides into the county fair and the sheep run after him, the sheep are held on mark out of camera frame by trainers .Trainers also place food in front of the camera and used a buzzer to call the sheep. On action, the trainer hits the buzzer, and the other trainers release the sheep from the lead ropes that hold them. The sheep run to the food / buzzer.

All the animals in the county fair were placed in their corrals and given water and shade between takes.

In the scene where a bull runs and hits a man, impaling him with his horn, and runs off with him impaled on his head, the shot was done with cameras locked off and with the actor doing his part first in front of green screen without the bull. Once that was finished, a pen was built at each end of the run area out of stock panels. The handlers walked the bull to the pen. On action, the handlers opened the gate and cued the bull to run to the pen. Once he reached the pen he was closed in and given some grain. The rest was done through special effects.

Whenever we see the two main actors riding double on a horse, the wranglers assisted the actors in mounting the horse.

In the scene where the bad guys ride after the protagonist and he rides past an oncoming train, two cameras were set up, one on each side of the train tracks. On action, a stunt double rode the horse over the tracks at a run. Camera cuts, shoots the same action several times. Then, with the horses placed far from the tracks, they shot several angles of the oncoming train. The rest was pieced together in post-production.

In the scene where an actor rides a bicycle and crashes into a line of horses tied to posts and they fall like dominoes, the wranglers brought horses to the set and tied them to hitching posts side by side in the shot. A stunt man rode the bike towards the line of hitched horses and veered off at the last minute. The actual stunt was done without any horses in the shot. A life-sized fake horse was brought in and placed on its side in the place of the first horse. The rest of the action was achieved in post with CGI.

In the scene where the Indians placed a snake's head over a bowl to extract its venom, a professional snake handler was put in costume as one of the Apache`s. Holding the snake by the head, the trainer easily milked the venom from the rattlesnake into a wooden cup in one take. Nobody touched the venom. Instead, production created fake venom made of milk and colored water.