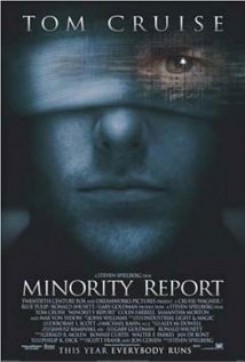 In a future where a special police unit is able to arrest murderers before they commit their crimes, an officer from that unit is himself accused of a future murder.

During the opening sequence, two horse-mounted policemen walk quietly down the street. Trainers who doubled as actors rode the horses at slow walk down the paved path. Later, John is chased into an alley-way by the Pre Crime officers. John is forced against a wire gate and a large dog suddenly appears from behind the gate. It barks viciously and strains against the gate. Trainers cued Dominic the Rottweiler to bark aggressively from off-camera using squeaky toys to get his attention. Dominic stood on a padded platform that was secured to the ground. Still on the run, John hides out in a tenement building until he is healed. Rats hover in the darkness of the building as Pre Crime officers release mechanical spiders to invade the complex and find John. Trainers placed the rats on their marks and used a buzzer to cue them to run from point A to point B. Earlier, John buys drugs from a man on the street. In the darkness, a dog lies next to the man on the ground. Trainers placed the dog on its mark and cued it to stay from off-camera.