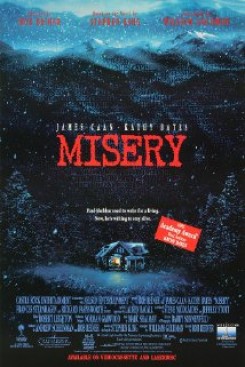 Misery is a thriller about Paul Sheldon, a novelist who writes "Misery" stories, Misery being a fictional woman. He has gone to a mountain retreat in order to complete the last in this series of books during a heavy snow fall. As he is headed into town, he is caught in a terrible snow storm in which he is involved in a car accident leaving him unconscious. He is then rescued by Annie Welds, who turns out to be a mentally deranged nurse previously accused of numerous murders. Annie takes him to her home where she nurses him back to health. He is held captive by Annie, being forced to continue his writing of the "Misery" novels, Annie claiming to be his number-one fan.

Animal action is minimal. Annie has a pet pig, named "Misery" which she introduces to Paul at his bedside. She also allows the pig to lay in bed with her while she is watching television.