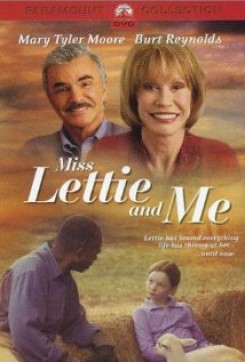 Miss Lettie and Me

A sweet story about a young girl named Travis who is sent by her mother to live with her aunt whom she has never met. Mary Tyler Moore plays Aunt Lettie, who is not receptive to this child at first. Thank goodness Isaiah, the handyman, lives next door and takes care of Travis until Miss Lettie comes around.

Down on Aunt Lettie's Farm…

Travis and Isaiah feed the chickens in the chicken coop in one scene. Trainers placed the chickens around the coop and spread some feed around. The actors also had feed in the buckets as they walked around feeding the chickens and delivering their lines.

The movie was filmed on Brookfield Plantation in Griffin Georgia. Twenty sheep were used, including a newborn lamb that was 6 days old and two lambs that were 2 1/2 months old. In a few scenes, a herd of sheep is seen grazing in a pasture. A herd of twenty sheep were placed inside a fenced pasture and grazed naturally as the cameraman caught them on film. A sheep named Tallulah was placed close to the fence amongst the other nineteen grazing sheep while the young actress approached the fence with a handful of food. Tallulah was happy to hang out and let the actress feed and pet her. Later, Lettie approaches the fence and feeds and pets Tallulah.

While Isaiah and Travis are in the barn, Isaiah holds one of Tallulah's babies in his arms and hands the lamb to Travis. Later, Lettie enters the barn and finds the young actress lying in the hay fast asleep holding the baby lamb who also appears to be sleeping. The trainer and the young actress prepped for this scene several weeks before actually shooting the scene. The lamb was a newborn that was 6 days old at the time. The actress was instructed as to how to hold the lamb, as well as becoming comfortable doing it. The actress fell in love with the lambs and was a natural at handling them. Reports from the set indicate that they seemed very fond of her too. For a scene where the actress cuddles the lamb and appears to be asleep next to it, the cameraman would wait to film the scene while the actress petted the lamb until it was relaxed. As you can see in the scene, this technique seemed to work since the lamb appears to be catching a few real ZZZ's before its next scene.

It Followed Her To School One Day

Travis brings her lamb, Orphan, to school one day on a leash. They walk down the hall and as Travis stops, Orphan gets away and runs into the auditorium. The lamb runs down a row of empty folding chairs that are set up. Travis follows Orphan, as do the other kids. Orphan continues to run in the room and onto the stage with Travis following in pursuit. The two older lambs, 2 ½ months old, were on call for the rest of the scenes. A trainer put the leash on the lamb and handed it to the actress. As the lamb and the actress walked down the hallway full of kids, the kids moved to the side making room for them to enter. When the lamb gets away from Travis, there is food spread on the floor heading in the direction the lamb is supposed to walk. There is also a trainer standing in front of the lamb, but off camera, guiding the animal through the auditorium. Travis and the other kids don't enter the room until the lamb is at the end of the row of chairs, giving plenty of room between the kids and the lamb. Although it appears as though the kids are chasing the lamb and it is somewhat chaotic, the whole scene was well choreographed and the lamb always had a head start with lots of distance between the animal and the kids. A trainer was standing behind the stage calling to the lamb as it ran there and received an edible reward.

Travis and the lamb are sitting on a bench in the hallway when Miss Lettie comes to school to get them. A trainer placed the lamb in the arms of the actress and stood off camera, retrieving the lamb after the scene was filmed. Lettie is then driving the car with Travis and the lamb in the backseat. As the car enters the plantation, it passes a herd of grazing sheep. The trainer placed the lamb on the backseat next to the actress who held it while the car was driven a short distance at a very slow speed. When the car stops, Miss Lettie gets out and opens the back door to let Travis out of the car with the lamb in her arms.

As Travis knits in bed, Orphan lays down next to her. Travis kisses the lamb. A trainer placed the lamb on the bed next to the actress. The lamb was more than happy to receive an on screen kiss in her first starring role!

In the kitchen, where Travis has some biscuits on a cookie sheet, Orphan runs around until Travis drops the biscuits on the floor allowing Orphan to nibble on one. Travis soon shoos it away. Three trainers stood around the actress off camera holding bottles of milk while another trainer released the lamb onto the set. The trainers took turns tapping on the milk bottles to make the lamb run in that direction. Although it appears as though Travis drops the tray of biscuits, a prop man standing out of frame actually drops the tray so it is a controlled drop, not too close to the lamb. The roll that the lamb is seen nibbling had some grain on it to make it more appealing. To make it appear as if Travis shoved the lamb away, the actress patted the lamb gently on its rear end as a trainer stood off camera tapping a milk bottle. The lamb exited very quickly to get some milk.

For Christmas, Orphan wears a big red bow around its neck. Travis holds the lamb and hands it to Lettie. A trainer placed the bow loosely around the lamb's neck and then handed it to the actress right before the scene began. The actress carefully handed the lamb to Miss Lettie and the trainer took it back when the scene was over.